Epstein-Barr virus (EBV), also known as human herpesvirus 4, is a member of the herpes virus family. It is one of the most common human viruses. EBV is found all over the world. Most people get infected with EBV at some point in their lives. EBV spreads most commonly through bodily fluids, primarily saliva. EBV can cause infectious mononucleosis, also called mono, and other illnesses.

Symptoms of EBV infection can include 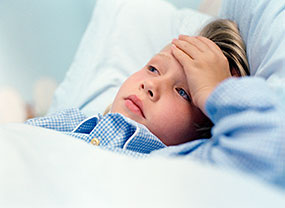 Many people become infected with EBV in childhood. EBV infections in children usually do not cause symptoms, or the symptoms are not distinguishable from other mild, brief childhood illnesses. People who get symptoms from EBV infection, usually teenagers or adults, get better in two to four weeks. However, some people may feel fatigued for several weeks or even months.

After you get an EBV infection, the virus becomes latent (inactive) in your body. In some cases, the virus may reactivate. This does not always cause symptoms, but people with weakened immune systems are more likely to develop symptoms if EBV reactivates.

EBV is spread by saliva through:

EBV spreads most commonly through bodily fluids, especially saliva. However, EBV can also spread through blood and semen during sexual contact, blood transfusions, and organ transplantations.

EBV can be spread by using objects, such as a toothbrush or drinking glass, that an infected person recently used. The virus probably survives on an object at least as long as the object remains moist.

The first time you get infected with EBV (primary EBV infection) you can spread the virus for weeks and even before you have symptoms. Once the virus is in your body, it stays there in a latent (inactive) state. If the virus reactivates, you can potentially spread EBV to others no matter how much time has passed since the initial infection.

There is no vaccine to protect against EBV infection. You can help protect yourself by not kissing or sharing drinks, food, or personal items, like toothbrushes, with people who have EBV infection.

There is no specific treatment for EBV. However, some things can be done to help relieve symptoms, including