Epstein-Barr virus (EBV), also known as human herpesvirus 4, is a gamma herpes virus that occurs only in humans. Laboratory testing can help distinguish whether someone is susceptible to EBV infection or has a recent or past infection.

Healthcare providers can test for antibodies to the following EBV-associated antigens: 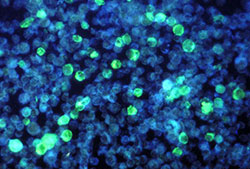 The interpretation of EBV antibody tests requires familiarity with these tests and access to the patient’s clinical information.

Interpretation of EBV antibody tests and diagnosis of EBV infection is summarized as follows:

Testing paired acute- and convalescent-phase serum samples is not useful to distinguish between recent and past EBV infections. In most cases, the antibody response occurs rapidly during primary EBV infection. The clinical findings of infectious mononucleosis occur in conjunction with the appearance of IgG and IgM anti-VCA antibodies. However, the antibody pattern is not stable before symptoms appear.