Gasoline-powered engines on boats, including onboard generators, produce carbon monoxide (CO), a colorless and odorless gas that can poison or kill someone who breathes too much of it.

How CO Can Build Up In a Boat 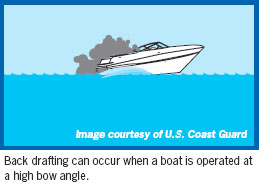 Larger boats, such as houseboats, sometimes have generators that vent toward the rear of the boat. This venting poses a danger of CO poisoning to people on the rear swim deck or water platform. On larger boats CO builds up above the water near the water platform. CO that builds up in the air space beneath the stern deck or on and near the swim deck can kill someone in seconds.

Traveling at slow speeds or idling in the water can cause CO to build up in a boat’s cabin, cockpit, bridge, and aft deck, or in an open area. Wind from the aft section of the boat can increase this buildup of CO.

Back drafting can cause CO to build up inside the cabin, cockpit, and bridge when a boat is operated at a high bow angle, is improperly or heavily loaded, or has an opening that draws in exhaust.

The most common symptoms of CO poisoning are headache, dizziness, weakness, nausea, vomiting, chest pain, and confusion. High levels of CO inhalation can cause death. CO poisoning can also cause you to pass out and fall into the water and drown. A person who is sleeping or intoxicated can die from CO poisoning before ever having symptoms.

How to Prevent CO Poisoning on Boats 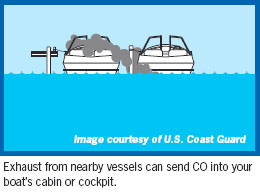 Install and maintain a working CO detector listed by Underwriters’ Laboratories (UL) as appropriate for marine use inside the boat.

If you think a person on your boat has CO poisoning move him or her to fresh air right away and contact the nearest emergency services.

More information on CO and boating