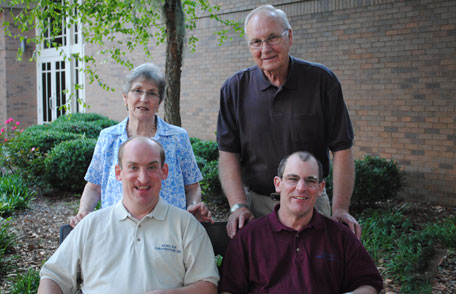 David, age 47, is John’s younger brother. He worked for nine years in the kitchen of an inn before he started having trouble with anxiety. The anxiety developed into a panic disorder and he became unable to work. For a few years, the family never went out of town together. Familiar activities like his day program or going to church were fine, but unfamiliar activities and places would send David into panic mode. These days David does volunteer work as part of a day program. Throughout the day, he is with staff members he knows. Ruth says “he feels secure that whoever is with him is someone who won’t push him into a situation he can’t handle.” 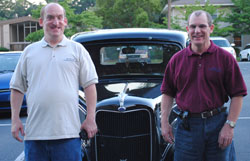 Ruth and Earl raised their sons before there was a diagnosis of fragile X syndrome.

“The school put a lot of pressure on John and David—thinking their challenges were a result of bad behavior—instead of managing the environment so they didn’t get anxious and upset. If there was one thing I could change for John and David, it would be eliminating that anxiety. My sons seldom have meltdowns anymore, but it’s that anxiety that hurts their lives.”

Ruth and Earl don’t talk with John and David about what will happen when they’re gone. They know their sons will ask them where they’re going and when.

“My sons understand that somebody is going to need to take care of them.” She has two nieces that are younger than John and David. The four cousins grew up together. The nieces will step in when Ruth and Earl can’t. “They know they’re in training and one of them closely watches what I do when there’s a problem, and asks lots of questions.”

“My sons have gained more control and become more flexible as they’ve gotten older. It’s no longer a catastrophe if their routine changes. Doors will open. We walk through them and wait for the next one.”

CDC would like to thank Ruth for sharing her personal story.

“We had a miracle last week. My youngest child Joslin grabbed my hand and pulled me to the refrigerator. My husband and I still had to guess what she wanted, but it’s a big deal that she’s pulling us to the refrigerator. Kids with fragile X just can’t communicate what they want because of speech delays or hyperactivity. We have to rejoice in the little things. 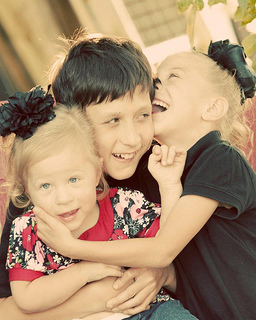 “All three of our children have fragile X syndrome with the full mutation, and they all have Attention-Deficit/Hyperactivity Disorder. There’s occupational therapy, physical therapy, and speech therapy at school.

“Brighton, our oldest, has grown out of a lot of his needs, but he still has some speech therapy. Avery, our middle child, has occupational therapy just for her sensory needs. Sometimes we take her down to a hammock we have hanging in our basement and do a lot of swinging, or we have a soft baby brush and we brush her arms and her legs if things are really bad. She needs that sensory input. For her, falling apart can be anything from rocking and bouncing and humming to total mayhem where she hurls herself into the wall or furniture, and throws things. Joslin, our youngest, has her therapies at an early intervention center.

“I wish we had the resources to have specialists come to our house but we don’t. The burden falls on us as parents to fill those gaps, so that’s added pressure. We tell our family what we’re working on with the kids and they’ll help Brighton with his speech, or if Avery starts falling apart they’ll give her a good hug for the sensory input. Having that support system has made a world of difference for us.

“Fragile X is so hard because it’s genetic. We had no idea it was in our family. When Brighton was diagnosed at five, we had Avery tested. She was nine months old. Marc and I didn’t understand the genetic piece and when I learned I was the carrier, I felt like I wanted to die. My dad is a carrier and so are my sisters. So far none of them have children with fragile X, but there’s always that chance. Since I have daughters, I also worry if they’ll have the ovarian insufficiency that can come with fragile X, and if they’ll be able to have children of their own. [Ovarian insufficiency is associated with fragile X- associated disorders.]

“At the beginning when Brighton was diagnosed, I wish fragile X hadn’t been such a foreign concept. I felt so alone when I got the diagnosis. I also wish that in my time of mourning I would have been able to look into the future and see how happy my kids are and how happy our lives are. There are tough times, there really are. But there’s so much joy.”

CDC would like to thank Rachel for sharing her personal story.