There are three stages to clinical course of pertussis:

Pertussis symptoms usually develop within 5 to 10 days after exposure, but sometimes not for as long as 3 weeks. Pertussis has an insidious onset with catarrhal symptoms that are indistinguishable from those of minor respiratory tract infections. The cough, which is initially intermittent, can become paroxysmal. In typical cases, paroxysms terminate with “inspiratory whoop” and posttussive vomiting can follow. The illness can be milder and the characteristic paroxysmal cough and “whoop” may be absent in children, adolescents, and adults who were previously vaccinated.

Paroxysms of cough, which may occur more at night, usually increase in frequency and severity as the illness progresses. The cough typically persists for 1 to 6 weeks or more. After paroxysms subside, a nonparoxysmal cough can continue for 2 to 6 weeks or longer.

Unvaccinated or incompletely vaccinated infants younger than 12 months of age have the highest risk for severe complications and death. In infants, apnea may be the only symptom and the cough may be minimal or absent. There is increasing awareness and recognition of pertussis as a disease that affects adolescents and adults. However, clinicians often overlook pertussis in the differential diagnosis of cough illness in this population. Illness is generally less severe, and the typical “whoop” less frequently seen in adolescents and adults.

It is important to educate parents to consider pertussis when their child has a cough. Let them know that it can be a severe illness, especially for infants, and they should seek immediate treatment. 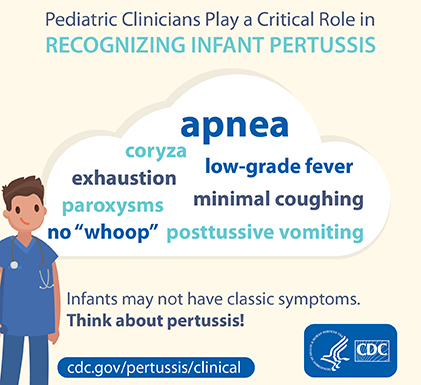 Infants may not have classic symptoms and only present with apnea.

* Symptoms may be milder and paroxysmal cough may be absent, particularly in previously vaccinated individuals. 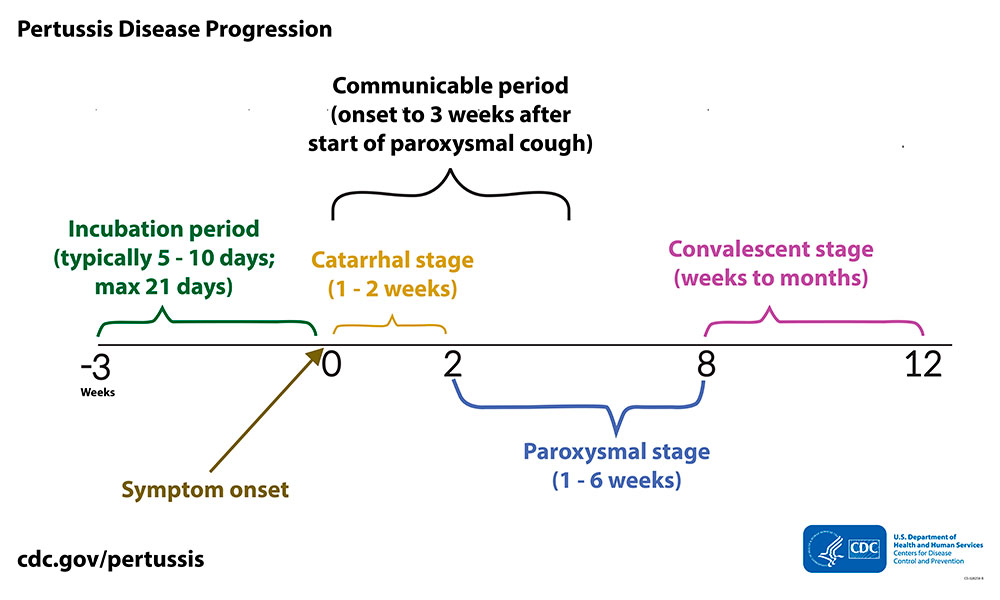