People acquire trichinellosis by consuming raw or undercooked meat infected with the Trichinella parasite, particularly wild game meat or pork. Even tasting very small amounts of undercooked meat during preparation or cooking puts you at risk for infection. Outbreaks occur in settings where multiple people consume the same Trichinella-infected meat.

Figure 1. Cases of trichinellosis in the United States reported to CDC by year, 1947–2015 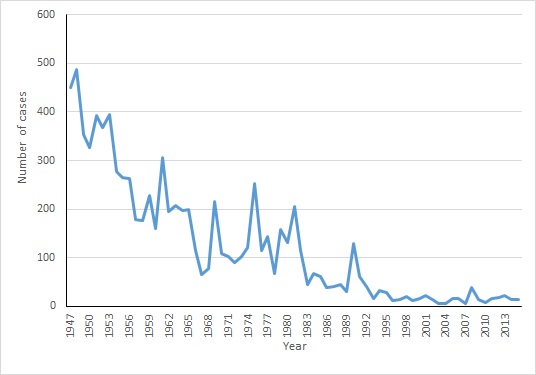 Worldwide, an estimated 10,000 cases of trichinellosis occur every year. Several different species of Trichinella can cause human disease; the most common species is Trichinella spiralis, which has a global distribution and is the species most commonly found in pigs. Other Trichinella species are less commonly reported as the cause of human disease and may be found in different parts of the world, usually infecting wild animals. 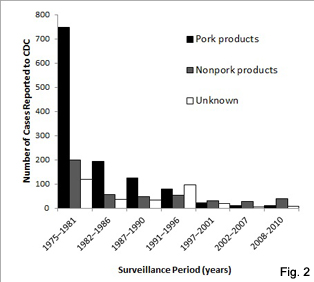 In the United States, trichinellosis cases are reported to CDC much less commonly now than in the past (Figure 1). During the late 1940s, when the U.S. Public Health Service began counting cases of trichinellosis, 400 cases in the United States were recorded each year on average. During 2011–2015, 16 cases were reported to CDC each year on average. The overall number of cases reported has decreased because of improved pig-raising practices in the pork industry, commercial and home freezing of pork, and public awareness of the danger of eating raw or undercooked meat products. The number of cases associated with raw or undercooked wild game meats has remained relatively constant over time (Figure 2).  Over the past 40 years, few cases of trichinellosis have been reported in the United States, and the risk of trichinellosis from commercially raised and properly prepared pork is very low. However, eating undercooked wild game, particularly bear meat, puts one at risk for acquiring this disease.