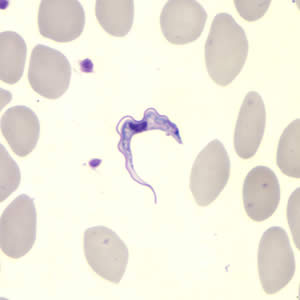 Early diagnosis is difficult because signs and symptoms in the first stage are non-specific and because diagnostic measures are insensitive. Diagnosis requires confirming the presence of the parasite in any body fluid. With T. b. gambiense, it may be difficult to detect trypomastigotes in routine blood smears because parasitemia levels are usually low and variable. The classic approach for diagnosing T. b. gambiense infection is by light-microscopic detection of the parasite in a lymph node aspirate (usually, from a posterior cervical node). Concentration techniques and serial examinations can be used for blood (centrifugation followed by buffy coat examination, mini-anion exchange centrifugation technique, or microhematocrit centrifugation technique). With T. b. rhodesiense, parasitemia is usually higher than with T. b. gambiense and symptomatic patients typically have detectable parasites in the blood. The parasite also may be found in chancre fluid, or bone marrow aspirates.

Reliable serologic testing for T. b. rhodesiense is not available and microscopic detection of the parasite is definitive diagnosis.

Serologic testing for T. b. gambiense is used for screening purposes only and the definitive diagnosis rests on microscopic observation of the parasite. Recently, rapid diagnostic tests for T. b. gambiense infection were developed and introduced to use in the field in endemic countries: the HAT Sero-K-SeT (Coris BioConcept, Gembloux, Belgium) and the SD Bioline HAT 1.0 (Standard Diagnostics, Yongin, South Korea). These tests are more suitable for passive screening and surveillance in fixed health centers in endemic countries that often lack electricity and laboratory infrastructure.

Staging for both T. b. gambiense and T. b. rhodesiense (i.e., assessment of neurological infection) is performed by microscopic examination of CSF collected by lumbar puncture on a wet preparation looking for motile trypomastigotes and white blood cells (WBC). Patients with five or fewer WBC per microliter and no trypomastigotes are considered to be in the first stage, and those with more than five WBCs per microliter or trypomastigotes are considered to be in the second stage. CSF testing is done after a parasitologic diagnosis has been made by microscopic examination of blood, lymph node aspirates, chancre fluid, or bone marrow or when indications of infection are present that justify a lumbar puncture (e.g., clinical signs and symptoms of sleeping sickness or strong serologic suspicion). Isolation of the parasite by inoculation of rats or mice is a sensitive diagnostic method, but its use is limited to T. b. rhodesiense.