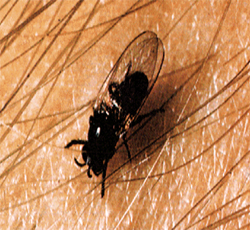 Blackflies are the vector for onchocerciasis.

The blackflies that transmit the parasite bite during the day. Female blackflies need to ingest blood for ovulation, so they feed on humans. Some species of blackflies may also feed on certain animals as well. If a blackfly bites an infected person, onchocerciasis larvae can be ingested by the blackfly after which they migrate to the flight muscles. The larvae develop inside the blackfly and become infective for humans in about one week. They migrate to the biting parts of the fly where they can be transmitted back to humans when it bites again.

Humans become infected when blackflies deposit Onchocerca infective larvae into the skin when biting to extract blood. Once inside the human body, the larvae mature into adults in approximately 12–18 months. Most adult female worms live in fibrous nodules under the skin and sometimes near muscles and joints. Adult male worms are usually found near the female worms. Nodules form around the worms as part of the interaction between the parasite and its human host. Inside the nodules the worms are relatively safe from the human immune response. As adults, female worms produce thousands of new larvae daily. The larvae become detectable in the skin 12–18 months after the initial infection. The adult worms can live approximately 10–15 years inside the human body, and their larvae have a lifespan of approximately 12–15 months.

Some people do not experience symptoms while infected with O. volvulus, as the larvae can migrate through the human body without provoking a response from the immune system. But many people do have symptoms, which include itchy skin rashes, nodules under the skin, and vision changes. There can be non-painful swelling of lymph glands, but this is not common. Most symptoms of onchocerciasis are caused by the body’s response to dead or dying larvae (also called microfilariae). The inflammation caused in the skin, in addition to causing itching, can result in long-term damage to the skin. This can cause changes in the color of the skin that result in a “leopard skin” appearance, and can cause thinning of the skin with loss of elasticity that gives the skin a “cigarette-paper” appearance and can contribute to conditions such as “hanging groin.” The inflammation caused by larvae that die in the eye results initially in reversible lesions on the cornea that without treatment progress to permanent clouding of the cornea, resulting in blindness. There can also be inflammation of the optic nerve resulting in vision loss, particularly peripheral vision, and eventually blindness.