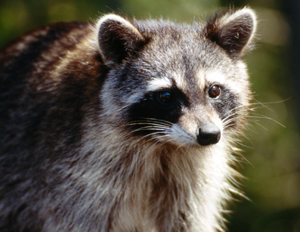 Raccoons are the primary, or definitive, host of Baylisascaris procyonis.

Raccoons are the primary, or definitive, host of Baylisascaris procyonis, a roundworm. Raccoons become infected with Baylisascaris in one of the following two ways:

Infected raccoons have been found throughout the United States, mainly in the Midwest, Northeast, Middle Atlantic, and West Coast.

Raccoons are peridomestic animals, which means they live in or around areas where people live. Roundworm eggs are passed in the feces of infected raccoons. Raccoons defecate in communal sites, called latrines. Raccoon latrines are often found at bases of trees, in unsealed attics, or on flat surfaces such as logs, tree stumps, rocks, decks, and rooftops. As more raccoons move into populated areas, the number and density of their latrines will increase.

The worms develop to maturity in the raccoon intestine, where they produce millions of eggs that are passed in the feces. Eggs that are excreted by raccoons are not immediately infectious. These eggs must develop in the environment for 2 to 4 weeks, after which the eggs are able to cause infection. The eggs are resistant to most environmental conditions and with adequate moisture, can survive for years.

While raccoons are the roundworm’s primary host, other types of animals can become infected. Birds and small mammals, such as rodents and rabbits, are susceptible to the parasite. Unlike raccoons, these animals sometimes show signs of infection, such as muscle spasms, tremors, and progressive weakness; infection can lead to death. Predator animals, including dogs, may become infected by eating an animal that has been infected with Baylisascaris. In some dogs, Baylisascaris may develop to adult worms and pass eggs in the dogs’ feces.

Young children are at risk for Baylisascaris infection as they may be more likely to put contaminated fingers, soil, or objects into their mouths. 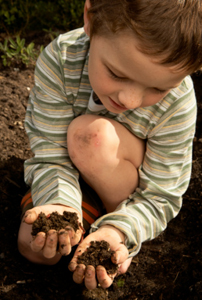 Young children are at risk for Baylisascaris infection as they may be more likely to put contaminated fingers, soil, or objects into their mouths.

People become infected by ingesting embryonated (fertile) eggs. Anyone who is exposed to environments where raccoons frequent is potentially at risk. Young children or developmentally disabled persons are at highest risk for infection as they may be more likely to put contaminated fingers, soil, or objects into their mouths.

Hunters, trappers, taxidermists, and wildlife handlers may also be at increased risk if they have contact with raccoons or raccoon habitats.

Fewer than 25 cases of Baylisascaris disease have been documented in the United States. However, it is possible that some cases are incorrectly diagnosed as other infections or go undiagnosed. Cases that are diagnosed tend to be severe.

Cases have been reported in California, Illinois, Louisiana, Massachusetts, Michigan, Minnesota, Missouri, New York, Oregon, Washington and Pennsylvania. As of 2018, there were 23 published human neurological cases in the US; six of the infected persons died.