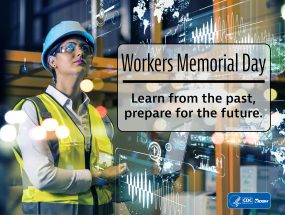 Workers Memorial Day, April 281, was established to recognize workers who died or suffered from exposures to hazards at work. It also encourages us to think of ways in which we all can help to achieve the goal of safer and healthier workplaces.

Occupational injuries and illnesses have broad social and economic impacts on workers and their families, on employers, and on society as a whole. There are several ways to estimate those consequences, such as methods that focus on medical costs, productivity losses, health-related quality of life losses, or risk-money tradeoffs that consider pain and suffering. Based on methods that focus on medical costs and productivity losses, the societal cost of work-related fatalities, injuries, and illnesses was estimated at $250 billion in 20073. Methods that include consideration of pain and suffering would result in a higher estimated societal cost5.

There are multiple sources of statistics for work-related injuries and illnesses in the United States. A new NIOSH webpage, Worker Health Charts, allows for the creation of custom charts from multiple data sources. Users can visualize rates, distribution, and trends in workplace injuries, illnesses and deaths, using data not easily available elsewhere.

NIOSH is working to better describe the burden of fatalities, injuries, and illnesses suffered by workers; learn more about “Burden, Need and Impact” the NIOSH framework for identifying research priorities.

While significant progress has occurred since the passage of the Occupational Safety and Health Act, much more remains to be made. Even as we continue efforts to eliminate the legacy hazards of the 20th Century, we are also called to address the emerging challenges of the 21st Century economy.

National Institute for Occupational Safety and Health Office of the Director