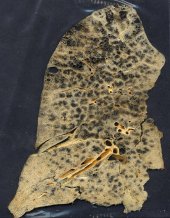 These three diseases typically take many years to develop. However, rapidly progressive forms of silicosis can occur after short periods of intense exposure. When severe, the diseases often lead to lung impairment, disability, and premature death. From a public health perspective, these conditions are entirely man-made, and can be avoided through appropriate dust control.

Other forms of pneumoconioses can be caused by inhaling dusts containing:

There is also a form called mixed-dust pneumoconiosis. Overall, most physicians do not encounter these diseases very frequently. Byssinosis, caused by exposure to cotton dust, is sometimes included among the pneumoconiosis. Although the pattern of lung abnormality in Byssinosis is different from the pneumoconioses listed above.

The 1995 NIOSH publication Criteria for a Recommended Standard – Occupational Exposure to Respirable Coal Mine Dust established a recommended exposure limit (REL) for coal mine dust. In 2011, NIOSH published a Current Intelligence Bulletin that updated the information on coal mine dust exposures and associated health effects from 1995 to the present. In 2012, the Government Accountability Office (GAO) reviewed the analytical methods used by NIOSH to establish its REL. GAO’s Reports and Key Studies Support the Scientific Conclusions Underlying the Proposed Exposure Limit for Respirable Coal Mine Dustexternal icon found these analytical methods were appropriate and achieving the NIOSH REL would reduce miners’ risk of respiratory disease over a working lifetime.

The pneumoconioses are typically detected through radiological imaging. Traditionally, this has been chest x-rays taken on film. However, digital computer technology is increasingly being used. The International Labor Office (ILO) provides guidelinesexternal icon for classifying radiographs of the pneumoconioses. NIOSH operates the B Reader Program. This program allows physicians to document their proficiency in classifying radiographs (using ILO guidelines) by taking an examination.

Medical Monitoring for the Pneumoconioses

NIOSH operates the Coal Workers’ Health Surveillance Program (CWHSP), which was mandated by the 1969 Federal Coal Mine Health and Safety Act. This program is intended to prevent coal workers’ pneumoconiosis by detecting the disease early and voluntary mine transfer to low dust jobs.

The Enhanced Coal Workers’ Health Surveillance Program is part of the CWHSP. This program investigates trends of black lung. It is staffed by trained NIOSH personnel who provide free screening services to coal miners across the U.S. through state-of-the-art mobile testing units.

Guidance on radiological classification methods and practices in worker monitoring for the pneumoconioses is provided on NIOSH’s Chest Radiography page.