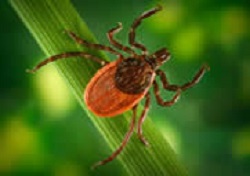 Outdoor workers are at risk of Lyme disease if they work at sites with infected ticks. In 2010, the highest number of confirmed Lyme disease cases were reported from New Jersey, Pennsylvania, Wisconsin, New York, Massachusetts, Connecticut, Minnesota, Maryland, Virginia, New Hampshire, Delaware, and Maine. U.S. workers in the northeastern and north-central States are at highest risk of exposure to infected ticks. Ticks may also transmit other tick-borne diseases to workers in these and other regions of the country. Worksites with woods, bushes, high grass, or leaf litter are likely to have more ticks. Outdoor workers should be extra careful to protect themselves in the late spring and summer when young ticks are most active.