The Autism and Developmental Disabilities Monitoring (ADDM) Network is the only collaborative network to track the number and characteristics of children with ASD in multiple communities in the United States. Since the launch of the ADDM Network in 2000, CDC has funded 17 sites in areas of Alabama, Arizona, Arkansas, California, Colorado, Florida, Maryland, Minnesota, Missouri, New Jersey, North Carolina, Pennsylvania, South Carolina, Tennessee, Utah, West Virginia, and Wisconsin. CDC also operates an additional ADDM site in Georgia. The ADDM Network tracks more than 220,000 8-year-old children and 220,000 4-year-old children. The ADDM Network is following-up on a cohort of 16-year-old children in select states.

The ADDM Network’s goals are to

How does ADDM develop estimates?

The ADDM Network estimates the number of children with ASD using a record review method to find children who have received an ASD diagnosis, an autism special educational classification, or an ASD International Classification of Diseases (ICD) code from a community health or education service provider. Additional information is collected from records to provide information about demographic characteristics and other important health conditions, like co-occurring intellectual disability. 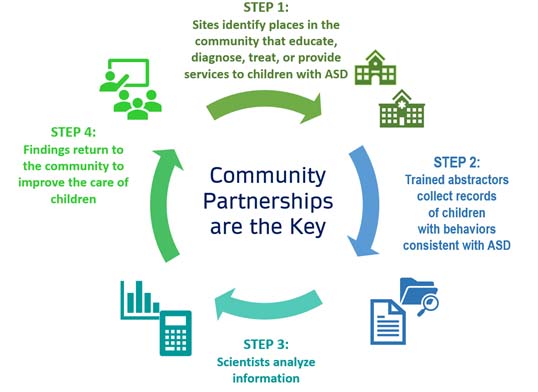 What are the different ways of estimating the number of children with ASD?

There are several different ways to estimate the number of children with ASD, and each method has its advantages and disadvantages.

What are the advantages of the ADDM Network method?

For the younger population, the ADDM Network tracks children who are at high risk for ASD based on a community provider’s suspicion that ASD is present.