Cigarette Smoking Among U.S. Adults Lowest Ever Recorded: 14% in 2017

Cigarette smoking has reached the lowest level ever recorded among U.S. adults, according to new data published by the Centers for Disease Control and Prevention (CDC), the Food and Drug Administration (FDA), and the National Institutes of Health’s National Cancer Institute (NCI). Still, about 47 million (1 in 5) U.S. adults used a tobacco product in 2017, and they used a variety of smoked, smokeless, and electronic tobacco products.

“This new all-time low in cigarette smoking among U.S. adults is a tremendous public health accomplishment – and it demonstrates the importance of continued proven strategies to reduce smoking,” said CDC Director Robert Redfield. “Despite this progress, work remains to reduce the harmful health effects of tobacco use.”

Data from the 2017 National Health Interview Survey (NHIS), released in today’s Morbidity and Mortality Weekly Report (MMWR), describe the range and scale of tobacco-product use among U.S. adults. These products include cigarettes, cigars, e-cigarettes, hookah/water pipes/pipes, and smokeless tobacco. The survey has been used to assess current cigarette smoking among U.S. adults since 1965, but ongoing surveillance of other tobacco products began more recently

By subgroups, use of any tobacco product was highest among: 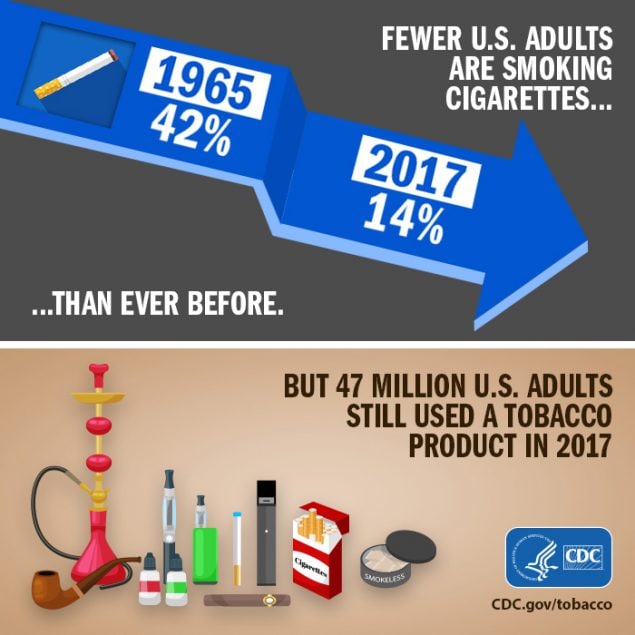 “For more than half a century, cigarette smoking has been the leading cause of cancer mortality in the United States. Eliminating smoking in America would, over time, eliminate about one-third of all cancer deaths,” said NCI Director Norman E. Sharpless, M.D., “The persistent disparities in adult smoking prevalence described in this report emphasize the need for further research to accelerate reductions in tobacco use among all Americans.”

Full implementation of comprehensive tobacco control programs at the national, state, and local levels can accelerate progress toward reducing tobacco-related death and disease in the United States. Such strategies and interventions include CDC’s Tips From Former Smokers® campaign, the FDA’s “Every Try Counts”external icon campaign, and NCI’s Smokefree.govexternal icon and toll-free national quitline (1-800-QUIT-NOW). These coordinated efforts, in combination with strategies that address the diversity of tobacco products, can reduce tobacco-related disease and death in the United States.

“The continued drop in adult smoking rates to historic lows is encouraging and the FDA is committed to accelerating declines in smoking and shifting the trajectory of tobacco-related disease and death through our comprehensive approach to tobacco and nicotine regulation,” said FDA Commissioner Scott Gottlieb, M.D. “We’ve taken new steps to ultimately render combustible cigarettes minimally or non-addictive and to advance a framework to encourage innovation of potentially less harmful products such as e-cigarettes for adults who still seek access to nicotine, as well as support the development of novel nicotine replacement drug therapies. At the same time we’re also working to protect kids from the dangers of tobacco product use, including e-cigarettes.”

Cigarette smoking remains the leading preventable cause of death and disease in the United States, and is responsible for the overwhelming burden of death and disease from tobacco use. Cigarette smoking kills an estimated 480,000 Americans each year, and about 16 million Americans suffer from a smoking-related illness. However, no form of tobacco use is risk-free. For more information or for free help quitting, call 1-800-QUIT-NOW or go to https://smokefree.gov/external icon.