Lyme disease is the most common vector-borne disease in the United States. A recently released estimate based on insurance records suggests that approximately 476,000 Americans are diagnosed and treated for Lyme disease each year.  In addition to a large burden of illness, areas where Lyme disease is common are expanding. 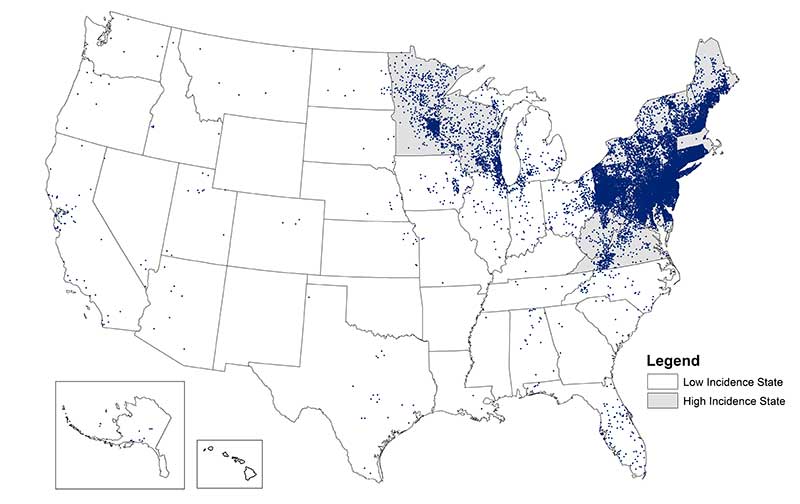 Each dot represents one case of Lyme disease and is placed randomly in the patient’s county of residence. The presence of a dot in a state does not necessarily mean that Lyme disease was acquired in that state. People travel between states, and the place of residence is sometimes different from the place where the patient became infected. Many high incidence states have modified surveillance practices. Contact your state health department for more information.

What is CDC doing about Lyme disease?

CDC researchers have discovered that a naturally occurring compound called nootkatone, found in grapefruit, Alaska yellow cedar trees, and some herbs, can kill or repel ticks and insects. On August 10, 2020, the Environmental Protection Agency (EPA) registered nootkatone, an active ingredient discovered and developed by DVBD, for use in repellents and insecticides. CDC’s work with licensed partner, Evolva, demonstrates that nootkatone effectively repels and kills mosquitoes and ticks at rates similar to products already on the market. Commercial products using the ingredient could be available as early as 2022.

Evaluating products used by the public 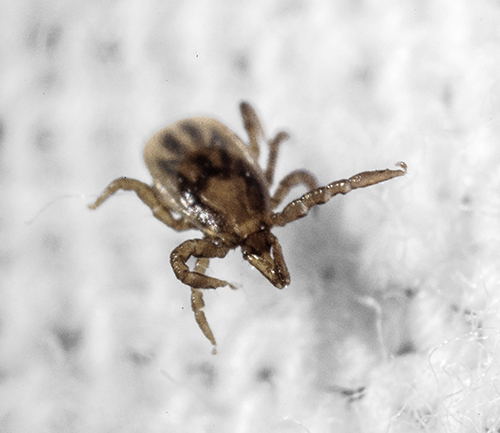 A tick tries to avoid contact with permethrin-treated fabric in the laboratory. This behavior is called “hot-footing”.

CDC and university partners have evaluated the effectiveness of permethrin-treated clothing as a way to prevent tick bites. Results from a pilot studyexternal icon and a follow-up show that treated fabric is highly irritating to ticks, causing them to drop off and stunting the activity for more than 24 hours afterwards.

CDC has developed and distributed a variety of educational materials–ranging from trail signs to patient information sheets–that are free to download or order. CDC’s Lyme disease website reaches over 7 million people annually and our distribution center has sent out over 30,000 trail signs, 350,000 brochures, and 400,000 prevention bookmarks in the last 5 years.

Promoting collaborative approaches to understanding Lyme and other tickborne diseases

CDC has awarded nearly $50 million to five universities to establish regional Centers of Excellence to help effectively address emerging vector-borne diseases in the United States. Scientists and public health experts at the Northeastexternal icon and Midwestexternal icon Regional Centers of Excellence will have a strong research component involving the surveillance and control of disease-carrying ticks.

CDC is contributing both funding and technical expertise to The Tick Projectexternal icon, a 5-year study to determine whether neighborhood-based interventions can reduce cases of Lyme and other tickborne diseases in people. The study will determine whether two tick control methods, used separately or together, can reduce the number of cases of Lyme disease at the neighborhood level. This large-scale research will involve 24 neighborhoods and over 1,000 households.

CDC is partnering with the Minnesota Department of Health, Mayo Clinic, Tennessee Department of Health, and Vanderbilt University to obtain up to 30,000 clinical specimens from patients with suspected tickborne illness over a 3-year period. CDC will use advanced molecular detection (AMD) methods to identify tickborne bacteria that may be the cause of these patients’ illnesses. Already, investigators have used AMD to sequence the full genome of a newly discovered bacteria, Borrelia mayonii, which is another cause of Lyme disease in upper Midwestern states.

Using advanced molecular detection (AMD) techniques, CDC researchers analyzed over 13,000 leftover samples for the presence of bacteria from patients who were suspected of having tickborne illness. Twelve tickborne species of bacteria that cause illness in people were detected, including two not previously associated with human illness. This large-scale study involving researchers from the Minnesota Department of Health, Mayo Clinic, Tennessee Department of Health, and Vanderbilt University, showed that a single advanced molecular detection test can be used to:

CDC is currently conducting research to understand what concerns healthcare providers and the public may have about any potential Lyme disease vaccines.