In This Update
Detection, Burden, and Impact

Implications: Pregnant women and women who plan on becoming pregnant should utilize all methods to reduce their risk of infection.

Implications: A single dose of Pfizer-BioNTech and Oxford-AstraZeneca vaccines resulted in substantial reductions in COVID-19-related hospitalizations in Scotland.

Here we present two reports (Zhou et al. and Supasa et al.) that examine the potential impacts of two recently emerged and regionally dominant SARS-CoV-2 variants (B.1.351 and B.1.1.7) on the effectiveness of existing prevention and treatment options for COVID-19 infection.

Note: Adapted from Zhou et al. Comparison of FRNT50 titers between B.1.531 variant and wild-type SARS-CoV-2 for the Pfizer-BionNTech and Oxford-AstraZeneca vaccines. Higher FRNT50 indicate better neutralization of virus. Licensed under CC BY. 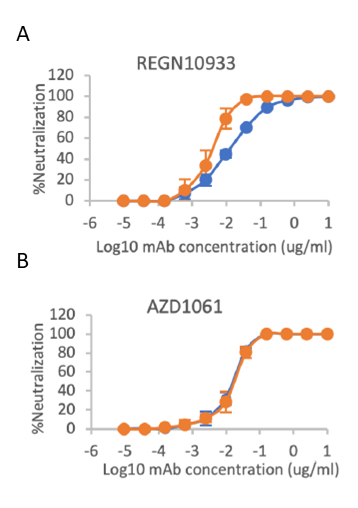 Note: Adapted from Supasa et al. Percent neutralization of wild-type SARS-CoV-2 or B.1.1.7 variant vs. commercially available monoclonal antibody concentration (mAb) (A. Regeneron: REGN10933 and B. AstraZeneca: AZD106). Licensed under CC BY.

Methods for both studies (Zhou et al. and Supasa et al.): In two separate studies, the neutralization of B.1.351 and of B.1.1.7 along with a wild-type SARS-CoV-2 viruses (control) were compared in vitro using a focus reduction neutralization test (FRNT) with immune sera and plasma from a UK cohort of persons recovered from or vaccinated against SARS-CoV-2 as well as monoclonal antibody (mAbs) cocktails. Additionally, for the B.1.1.7 variant, the N501Y mutation was modeled to examine effects on antibody and ACE2 affinity. Limitations for both studies: In vitro neutralization assays do not include assessment of the contributions to in vivo protection provide by other parts of the immune response such as B or T cells. Samples used in the neutralization studies were taken early after illness or vaccination and protective levels may change over time.

Implications for both studies (Zhou et al. and Supasa et al.): In Zhou et alexternal icon., neutralizing activity of antibodies were lower against SARS-CoV-2 B.1.351 than wild-type SARS-CoV-2 viruses suggesting monoclonal antibody therapy and vaccine effectiveness will be impacted. In Supasa et al.external icon, the B.1.1.7 variant did not evade treatment with existing monoclonal antibodies and there was no evidence of vaccine escape, indicating protection from the B.1.1.7 variant by existing vaccines. Wu et al.external icon also found evidence that the Moderna vaccine-induced antibody response neutralized the B.1.1.7 variant in vitro but less so the B.1.351 variant.

Note: Adapted from Tchesnokova et al. Triangles show distribution of silent mutations (i.e., base change did not result in amino acid change) and amino acid mutations (i.e., base change led to change in amino acid) across regions 414-583 of the spike protein. Bar shows the receptor-binding domain (RBD), the C-terminal domain of S1 spike region, the receptor-binding ridge epitope residues, the 443-450 loop residues, and the 570-572 loop residues. Used by permission of authors.

Several SARS-CoV-2 potential variants of interest have been identified recently. Two reports (West et al. and Annavajhala et al.) describe emergence of the B.1.526 variant in New York and the northeastern United States.

Methods: Developed a software tool, Variant Database, to detect changes in the spike protein mutational landscape by identifying collections of isolate sequences (clusters) reported to the Global Initiative on Sharing Avian Influenza Data (GISAIDexternal icon). Limitations: Only a small proportion of SARS-CoV-2 infections are tested for genetic sequences and reported to GISAID; geographic sampling might have varied over time and was not necessarily random (i.e., representative).

Methods: A random sample of SARS-CoV-2 nasopharyngeal swab specimens (n = 1,142) from 4,358 infected patients at a quaternary care center in New York City during November 1, 2020–February 15, 2021 were assayed for N501Y and E484K mutations. Whole genome nanopore sequencing was done on those flagged as potential N501Y- or E484K-harboring strains (n = 65), along with samples negative for these mutational signatures with Ct values <35 (n = 65). Limitations: Single center; not geographically generalizable; subset of positive samples were tested for the two mutations; study based on clinical submissions.

Implications for both studies (West et al. and Annavajhala et al.): The B.1.526 variant emerged rapidly and may already be widespread in the northeastern US. This variant includes multiple mutations that might facilitate SARS-CoV-2 infection and spread, including through attenuation of antibody neutralization (E484K), escape from antibodies against the N-terminal domain (D253G), and ACE2 interactions that might enhance viral infectivity (S477N). Continued mitigation efforts and increased capacity for genetic surveillance will be critical to limit and detect further development and spread of mutations.

Implications: These data provide evidence of real-world effectiveness of the BNT162b2 vaccine for a wide range of COVID-19 outcomes including severe outcomes and death, suggesting that widespread vaccination can mitigate COVID-19 burden. 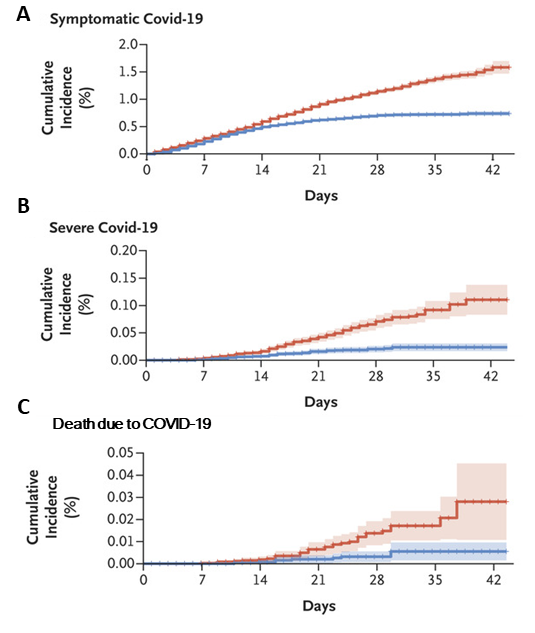 Association of the timing of school closings and behavioral changes with the evolution of the coronavirus disease 2019 pandemic in the US.external icon Zimmerman et al. JAMA Pediatrics (February 22, 2021).

Methods: A population-based interrupted-time-series analysis to simulate the independent association of school closures and behavioral changes with state-level COVID-19 case and death data (New York Times) from March 8–May 18, 2020. Proxies of behavioral change were time at work, time at home, searches for hand sanitizer, and dining out at restaurants based on cell phone and internet data. Limitations: Data for restaurant/dining out was only available for 36 states; methods of data collection could lead to measurement error for behaviors; did not account for differences in county-level school closure. Editorial Note: There are a few instances in the paper where results are reported as “per each day of delay in school closure, there was an associated reduction in cases”. However, the author confirmed that the correct language is “for each day earlier a school was closed, there was an associated reduction in cases.”

Implications: Voluntary behavioral changes such as reductions in time spent at work have a greater impact on COVID-19 spread than school closures which modestly reduce COVID-19 incidence and mortality. 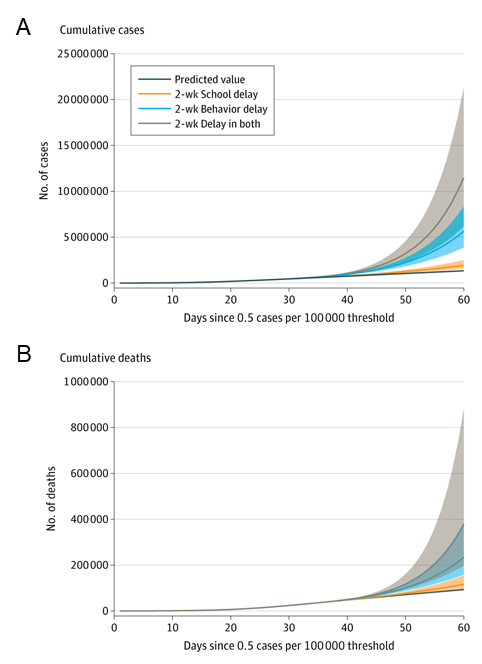 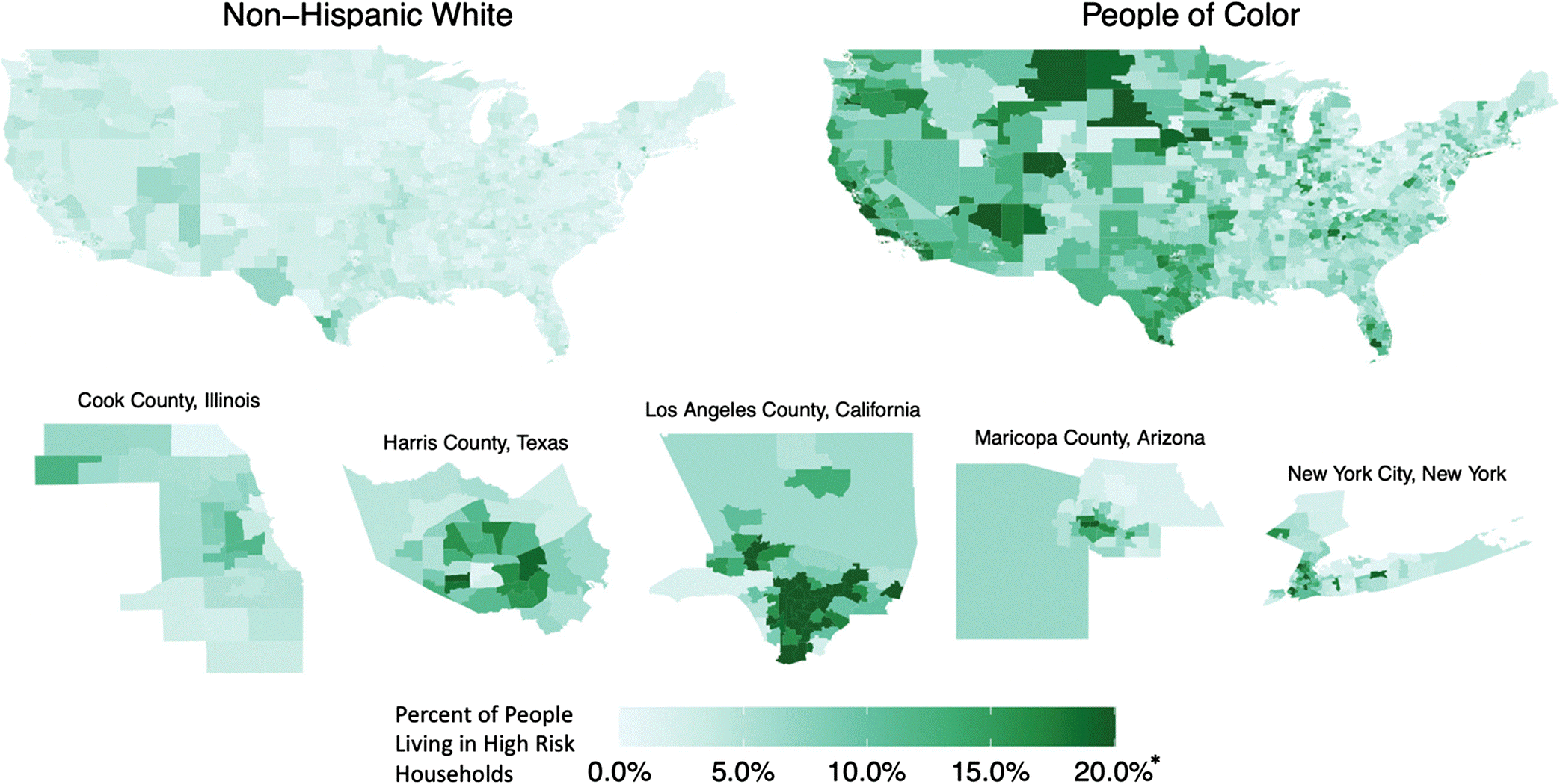 Note: Adapted from Reitsma et al. Percent of people living with at least one essential worker in a household with fewer rooms than people, by race/ethnicity. Inset shows estimates for the four most-populated counties and New York City. Permission request in process. 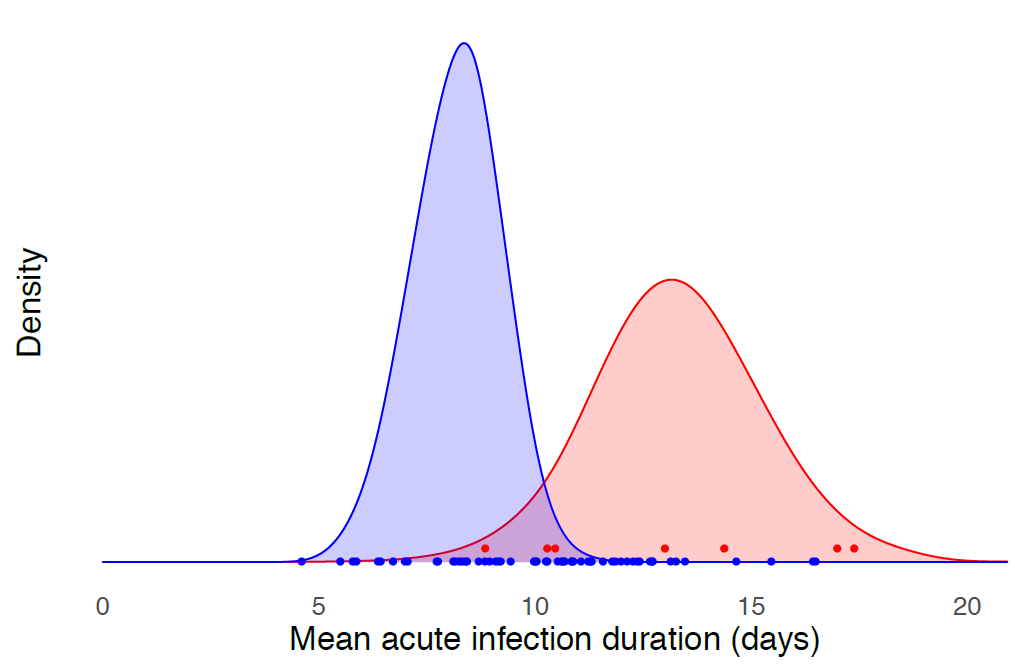