Hansen’s disease is diagnosed based on clinical presentation and the diagnosis is confirmed by skin or nerve biopsy and acid fast staining. In the United States, the National Hansen’s Disease ProgramExternal provides diagnostic services.

Some serological tests have been developed and promoted by some investigators, but they lack sufficient sensitivity and specificity to be used as diagnostic tests. For this reason they are not used to diagnose Hansen’s disease.

Depending on the form of leprosy suspected by the treating physician, the following specimens may be collected:

Biopsies are needed to definitively confirm a diagnosis of Hansen’s disease and to classify the disease, and slit skin smear may also be helpful in diagnosing those with mutlibacillary disease.

In the multibacillary form of Hansen’s disease, tissue biopsy of various affected sites may reveal typical histopathologic changes that show large numbers of foam cells. Foam cells are macrophages that have ingested, or phagocytized, M. leprae bacteria, but are unable to digest the organisms, who in turn multiply and use the macrophage as a method of transport throughout the body. This is how the bacteria cause the multiple lesions that may appear in all parts of the body in MB leprosy patients. 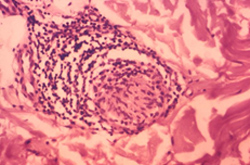 This photomicrograph reveals some of the classic histopathologic changes found in a skin section from an individual with a case of the leprosy, which may have been the paucibacillary form of the disease, though this has not been confirmed. Shown here is a nerve surrounded by a dense infiltrate consisting of undifferentiated histiocytes and large numbers of lymphocytes. The nerve sheath and endoneural region of the nerve were also infiltrated. This neural involvement was found to be independent of any pathology of the upper corium. 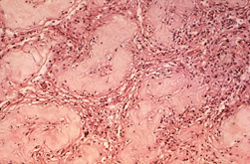 This photomicrograph reveals some of the histopathologic changes in a specimen of human testicular tissue, which included a large number of “foam cells”. These changes were attributed to a case of multibacillary (MB) leprosy.

The Ziehl-Neelson method using 5% sulphuric acid as decolorizing agent is used. The presence of acid-fast bacilli confirms the diagnosis of Hansen’s disease. 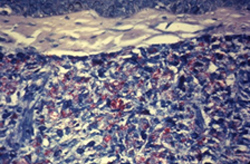 This acid-fast-stained photomicrograph of a tissue sample extracted from a patient with leprosy shows a chronic inflammatory lesion known as a granuloma, within which numerous red-colored M. leprae bacteria are visible. 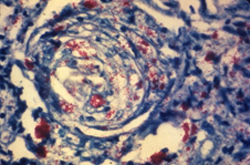 This photomicrograph of a skin tissue sample from a patient with leprosy shows a cutaneous nerve, which had been invaded by numerous M. leprae bacteria (shown in red).