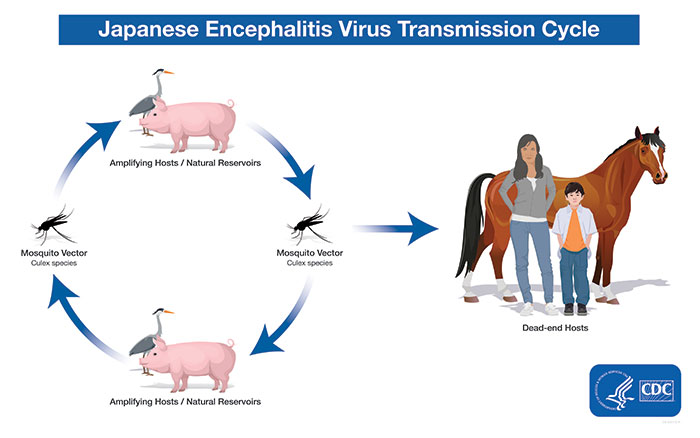 The virus is maintained in a cycle between mosquitoes and vertebrate hosts, primarily pigs and wading birds (also referred to as amplifying hosts or natural reservoirs). Humans are incidental or dead-end hosts, because they usually do not develop high enough concentrations of JE virus in their bloodstreams to infect feeding mosquitoes. 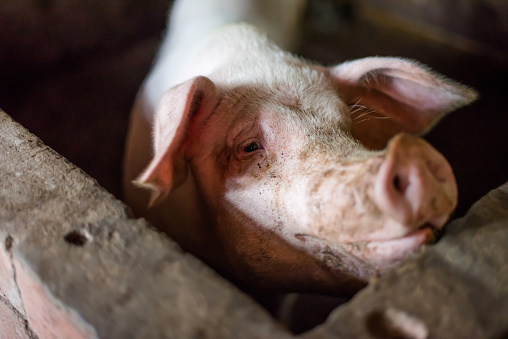 JE virus transmission occurs primarily in rural agricultural areas, often associated with rice production and flooding irrigation. In some areas of Asia, these conditions can occur near urban centers.

In temperate areas of Asia, JE virus transmission is seasonal. Human disease usually peaks in the summer and fall. In the subtropics and tropics, transmission can occur year-round, often with a peak during the rainy season.

Year-round with most cases reported July–November

Year-round with most cases reported July–November

Limited data but outbreak reported in 2013

Limited data but outbreak reported in 2013

Year-round with most cases reported May–September

Year-round with most cases reported May–September

Cases reported from majority of provinces, so transmission likely countrywide

Cases reported from majority of provinces, so transmission likely countrywide

All provinces except Xinjiang and Qinghai

All provinces except Xinjiang and Qinghai

Cases reported from many islands, including Sumatra, Java, Kalimantan, Bali, Nusa Tenggara, and Papua, so transmission likely on all islands

Cases reported from many islands, including Sumatra, Java, Kalimantan, Bali, Nusa Tenggara, and Papua, so transmission likely on all islands

Rare sporadic cases reported from all islands except Hokkaido

Rare sporadic cases reported from all islands except Hokkaido

Year-round, with peak season in Sarawak from October–December

Year-round, with peak season in Sarawak from October–December

Much higher rates of disease reported from Sarawak than peninsular Malaysia

Much higher rates of disease reported from Sarawak than peninsular Malaysia

Vaccine not routinely recommended for those trekking in high-altitude areas

Vaccine not routinely recommended for those trekking in high-altitude areas

Widespread except in mountainous areas

Widespread except in mountainous areas

1 Destination and transmission season information should be considered in association with travel duration and activities when making decisions on vaccination.

2 Data are based on published and unpublished reports. Risk assessments should be performed cautiously, because risk can vary within areas and from year to year, and surveillance data regarding human cases and JE virus transmission are often incomplete. In some endemic areas, human cases among residents are limited because of vaccination or natural immunity among older people. However, because JE virus is maintained in an enzootic cycle between animals and mosquitoes, susceptible visitors to these areas still may be at risk for infection.

3 Outbreaks previously occurred in the Western Pacific Islands of Guam (1947–1948) and Saipan (1990), but as they are no longer considered risk areas, they are not included in the table.