Monitor and Evaluate Progress toward Elimination/Control of NTDs

CDC works to help monitor and evaluate progress and impact of programs designed to control and eliminate disease. Control efforts focus on diseases that have not been targeted for elimination, to reduce transmission and treat affected individuals. Elimination efforts focus on human diseases that have been targeted for interruption of transmission. Each program has specific guidelines for mapping (assessing the burden of disease in a specific area), making decisions about implementing mass drug administration (MDA), and changing the frequency of (or stopping) MDA.

In 1997 the World Health Assembly passed a resolution calling for the global elimination of lymphatic filariasis (LF) as a public health problem by the year 2020. Shortly afterwards, the Pacific Program for the Elimination of Lymphatic Filariasis (PacELF) was formed and called for elimination of LF in the Pacific Region through a strategy of annual rounds of mass drug administration (MDA). Results from surveys conducted in 1999 established American Samoa as one of the countries with the highest filarial infection levels in the Pacific Region and the only U.S. territory endemic for LF. 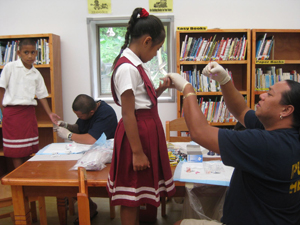 Since treatment began in 2000, CDC has assisted the American Samoa Department of Health (DOH) with surveys to monitor the progress of the LF program. Evaluations conducted in 2001 and 2003 showed that infection levels had not changed significantly since the beginning of the program. In response to these findings, CDC experts helped to re-examine and modify the communication and drug distribution strategies for the LF program. By 2006, a dramatic decline in infection levels was seen.

In 2007, with assistance from CDC, the DOH conducted a nationwide survey and found significant progress had been made toward the elimination of LF in American Samoa. As a precaution, the DOH made the decision to conduct another round of MDA the following year. Current WHO guidelines provide instruction for conducting a Transmission Assessment Survey (TAS) to determine whether MDA can be stopped in an area that has had at least five rounds of annual drug distribution. In collaboration with the American Samoa Departments of Health and Education, American Samoa Community College and The Task Force for Global Health, CDC conducted a TAS in February 2011. Results from this survey indicated that infection prevalence was below the threshold required for mass treatment. As a result, an official recommendation to stop MDA was made. In an effort to identify any residual infections in adults in American Samoa, arrangements were made to implement LF screening in routine well checks and new employment health screenings. Individuals will be given the opportunity to be tested and if found to be positive will be offered treatment.

CDC in Action: Guiding Countries on What to do After MDA is Stopped

Most countries where LF is widespread have instituted WHO-recommended mass drug administration (MDA) programs to help stop the spread of infection and interrupt transmission. WHO has produced clear guidelines for how to implement MDA programs, including how to assess if transmission has been lowered so MDA can be stopped. Less defined, however, are the steps a country must take once MDAs are stopped.

Togo was among the first African countries to institute a national control program for LF-elimination and has recently met WHO benchmarks for stopping MDA. CDC is working with the National Program for Elimination of LF (NPELF) in Togo to pilot a post-MDA program for LF. This program is intended to confirm elimination of LF transmission in Togo and to ensure if there are any additional cases, they would be quickly detected and measures taken to prevent resurgent transmission. This approach includes (1) a sustainable, laboratory-based, nation-wide LF monitoring system, (2) nation-wide re-mapping, and (3) active follow-up of reported cases of LF.