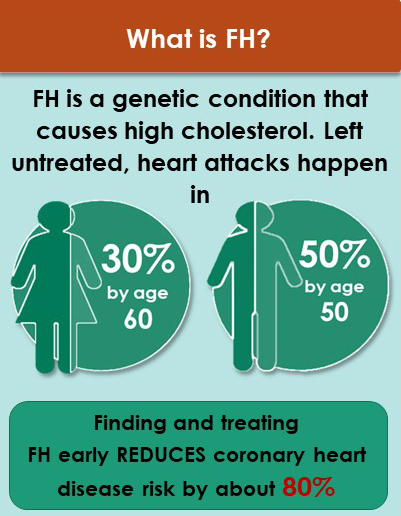 Familial hypercholesterolemia (FH) is a genetic disorder that affects about 1 in 250 people and increases the likelihood of having coronary heart disease at a younger age.

People with FH have increased blood levels of low-density lipoprotein (LDL) cholesterol, sometimes called “bad cholesterol.” Having too much LDL cholesterol in your blood increases your risk for developing coronary artery disease or having a heart attack. For people with FH, exercising and healthy eating habits are important, but often not enough to lower their cholesterol to a healthy level. Medicines, such as statins, are needed to help control cholesterol levels. If you have FH, finding the disorder early and treating it can reduce your risk of heart disease by about 80%. If your child is diagnosed with FH, statin therapy in childhood may be required, often starting by age 8-10.

How do I know if I have familial hypercholesterolemia?

One of the main signs of FH is LDL cholesterol levels over 190 mg/dL in adults (and over 160 mg/dL in children). In addition, most people with FH have a family health history of early heart disease or heart attacks. In some cases, elevated LDL levels are found through routine blood cholesterol screening. If you have a family health history of heart disease or FH and have not had your cholesterol screened, your doctor may order a lipid screening, which measures the amount of cholesterol and lipids in your blood. 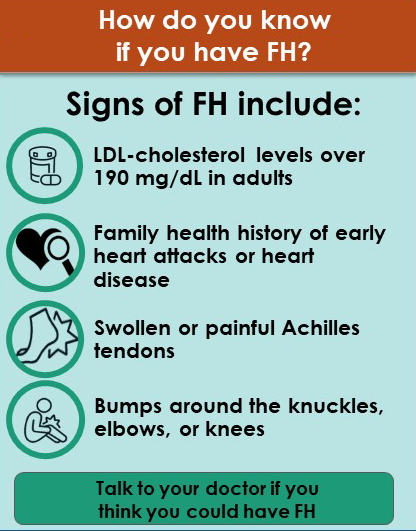 If your doctor suspects you have FH, he or she may refer you for genetic counseling and testing for FH.

Familial hypercholesterolemia (FH) can be caused by inherited changes (mutations) in the LDLR, APOB, and PCSK9 genes, which affect how your body regulates and removes cholesterol from your blood. About 60-80% of people with FH have a mutation found in one of these three genes. Genetic testing is available to check for mutations in these genes. However, there are likely more genes involved in FH that remain unknown.

If you are concerned that you could have familial hypercholesterolemia or hereditary heart disease, the first step is to collect your family health history of heart disease and share this information with your doctor.