Since January, CDC has been assisting with the investigation of two outbreaks of infections caused by Elizabethkingia anophelis in the Midwest. Although Elizabethkingia is a common organism in the environment, it rarely causes infections. CDC is assisting with testing samples from patients and a variety of potential sources, including healthcare products, water sources and the environment; to date, none of these have been found to be a source of the bacteria. CDC will continue to work with health departments in the affected states to identify the source of the bacteria and develop ways to prevent these infections. 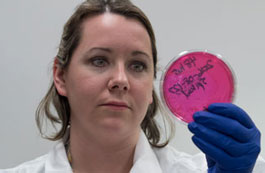 CDC and the Illinois Department of Public Health (IDPH) are investigating a cluster of infections caused by Elizabethkingia anophelis in 10 Illinois residents who have been diagnosed since Jan. 1, 2014. The strain of E. anophelis in this cluster is different from the strain that is causing the outbreak in Wisconsin. Six of the 10 patients have died. However, IDPH is unable to determine if Elizabethkingia was the cause of death because many of those individuals had underlying health conditions.

The cases were identified after IDPH sent alerts to Illinois hospitals and laboratories in early February and again in March requesting that they report all cases of Elizabethkingia going back to the beginning of 2014. Recent CDC testing of the specimens confirmed that the same strain made the 10 people sick but that the strain is distinct from the strain that has been identified in Wisconsin.

Illinois health officials continue to collect case histories and other information to try to find a connection among these patients. Previously, health providers were not required to report individual cases of Elizabethkingia, so it is difficult to determine the degree and kind of exposure that results in illness. For the same reason, it is difficult to estimate how many cases of illness actually occur each year.

Investigation into the Wisconsin outbreak has led to increased awareness of Elizabethkingia and additional reporting of cases to CDC. Technological advancements in laboratory testing have allowed scientists to differentiate Elizabethkingia anophelis from other types of Elizabethkingia and to identify patient clusters within this species. As CDC and state health department’s work together to investigate these outbreaks, other clusters may be identified.

Healthcare providers in Illinois should be aware of the recently-identified cluster and consider Elizabethkingia as a potential cause of bloodstream infections among patients.

Multi-state cluster of Elizabethkingia anophelis in Wisconsin, Michigan and Illinois

CDC, the Wisconsin Department of Health Services (WDHS)External, the Michigan Department of Health and Human Services (MDHHS)External, and the Illinois Department of Public Health (IDPH)External are investigating an outbreak of infections caused by a bacterium called Elizabethkingia anophelis, which is usually found in the environment. The majority of the infections identified to date have been bloodstream infections, but some patients have had Elizabethkingia isolated from other sites, such as their respiratory systems or joints.

Wisconsin was first notified of six potential cases between December 29, 2015 and January 4, 2016 and set up statewide surveillance on January 5, 2016. CDC issued a nationwide call for cases on January 20, 2016, via the Emerging Infections Network and again on March 2, 2016, via the Epidemic Information Exchange system, also known as Epi-X. These alerts asked states to look for any infections similar to the ones reported in Wisconsin, and to send isolates from any potential cases to CDC for testing to determine if they match the bacteria causing infections in Wisconsin.

Illinois sent alerts to hospitals on February 10 and March 29, 2016 requesting they report all cases of Elizabethkingia and save any specimens for possible testing at public health laboratories.  To date, only one isolate from Illinois has matched the bacteria causing the outbreak in Wisconsin.

Although Elizabethkingia is a common organism in the environment (water and soil), it rarely causes infections. CDC is assisting with testing samples from a variety of potential sources, including healthcare products, water sources and the environment; to date, none of these have been found to be a source of the bacteria.

CDC will continue to work with WDHS, MDHHS, and IDPH to identify the source of the bacteria and develop ways to prevent these infections.