During 2018–2019, breastfeeding initiation rates by county varied widely within states and ranged from 22% to more than 90% across the nation. These tables and maps present 2018–2019 National Vital Statistics System data from 3,079 counties or county equivalents in 48 states, the District of Columbia, and Puerto Rico. Tables also present rates for Guam and the Commonwealth of the Northern Mariana Islands.

These rates can be used to celebrate strengths and to identify locations that might benefit from focused interventions. Community-level strategies to support breastfeeding can focus on populations facing barriers that lead to low rates of breastfeeding. 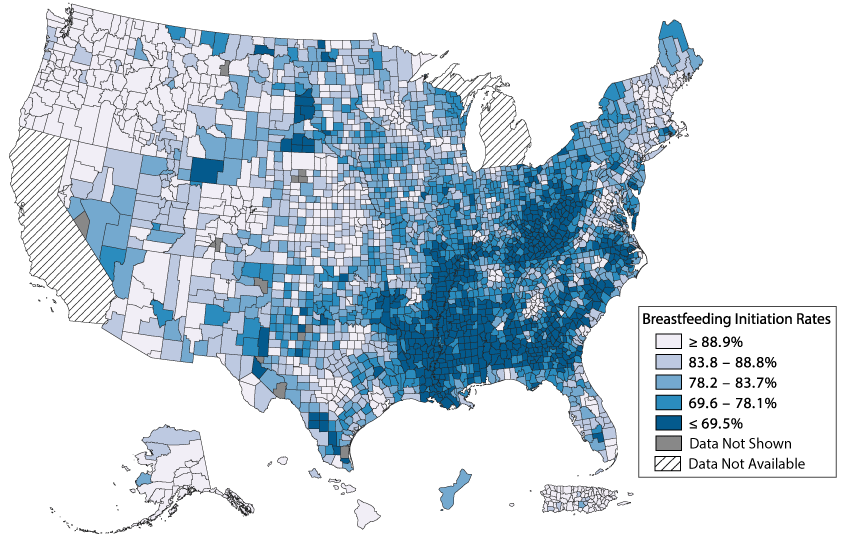 What information is being collected?

Birth certificate data from 2018–2019 National Vital Statistics System were used to determine the percentage of live infants who initiated breastfeeding. Breastfeeding initiation was defined as receiving any breast milk or colostrum during the period between delivery and discharge from the birth facility or completion of the birth certificate for home births. These rates are available by county or county equivalent (e.g., independent cities, parishes, boroughs) of the mother’s residence.

How and when are data collected?

Birth certificate data are collected from information provided by the mother and medical records during the period between delivery and discharge from the birth facility or completion of the birth certificate for home births.

Who is included in these data?

All infants born during 2018–2019 are included except infants who:

Why are some data not shown?

To prevent identification of individuals:

How are counties or county equivalents categorized on the maps?

They are categorized by quintiles of breastfeeding initiation, which are calculated from county or county equivalent rates for 48 states and the District of Columbia.

How do data in this report differ from breastfeeding data reported from National Immunization Survey (NIS)?