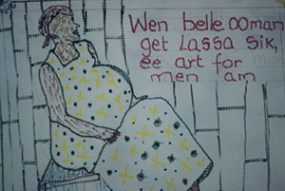 Signs and symptoms of Lassa fever typically occur 1-3 weeks after the patient comes into contact with the virus. For the majority of Lassa fever virus infections (approximately 80%), symptoms are mild and are undiagnosed. Mild symptoms include slight fever, general malaise and weakness, and headache. In 20% of infected individuals, however, disease may progress to more serious symptoms including hemorrhaging (in gums, eyes, or nose, as examples), respiratory distress, repeated vomiting, facial swelling, pain in the chest, back, and abdomen, and shock. Neurological problems have also been described, including hearing loss, tremors, and encephalitis. Death may occur within two weeks after symptom onset due to multi-organ failure.

The most common complication of Lassa fever is deafness. Various degrees of deafness occur in approximately one-third of infections, and in many cases hearing loss is permanent. As far as is known, severity of the disease does not affect this complication: deafness may develop in mild as well as in severe cases.

Approximately 15%-20% of patients hospitalized for Lassa fever die from the illness. However, only 1% of all Lassa virus infections result in death. The death rates for women in the third trimester of pregnancy are particularly high. Spontaneous abortion is a serious complication of infection with an estimated 95% mortality in fetuses of infected pregnant mothers.

Because the symptoms of Lassa fever are so varied and nonspecific, clinical diagnosis is often difficult. Lassa fever is also associated with occasional epidemics, during which the case-fatality rate can reach 50% in hospitalized patients.