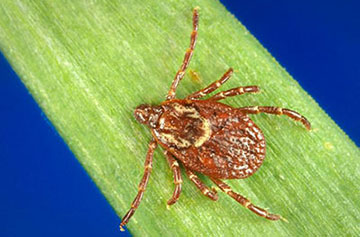 The bacterium that causes tularemia is highly infectious and can enter the human body through the skin, eyes, mouth, or lungs. Symptoms of infection vary depending on the route of entry. Usual sources of infection are described below. Transmission of tularemia from person to person has not been reported.

In the United States, ticks that transmit tularemia to humans include the dog tick (Dermacentor variabilis), the wood tick (Dermacentor andersoni), and the lone star tick (Amblyomma americanum). Deer flies (Chrysops spp.) have been shown to transmit tularemia in the western United States. Infections due to tick and deer fly bites usually take the form of ulceroglandular or glandular tularemia. 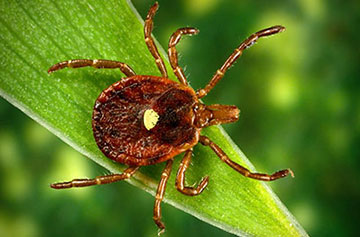 F. tularensis bacteria can be transmitted to humans via the skin when handling infected animal tissue. In particular, this can occur when hunting or skinning infected rabbits, muskrats, prairie dogs and other rodents. Many other animals have also been known to become ill with tularemia. Domestic cats are very susceptible to tularemia and have been known to transmit the bacteria to humans. Care should be taken when handling any sick or dead animal. Outbreaks of tularemia have occurred among hamsters purchased from pet stores. At least one child in the U.S. has developed tularemia after being bitten by a pet hamster. Infection due to handling animals can result in glandular, ulceroglandular and oculoglandular tularemia. Oropharyngeal tularemia can result from eating under-cooked meat of infected animals.

Humans can acquire tularemia by inhaling dust or aerosols contaminated with F. tularensis bacteria. This can occur during farming or landscaping activities, especially when machinery (e.g. tractors or mowers) runs over infected animals or carcasses. Although rare, this type of exposure can result in pneumonic tularemia, one of the most severe forms of the disease. Water can also become contaminated with the bacteria through contact with infected animals. Humans who drink contaminated water that has not been treated may contract oropharyngeal tularemia. This mode of transmission appears to be much more common in Europe than the U.S.