Although reasons for the declines are not totally clear, evidence suggests these declines are due to more teens abstaining from sexual activity, and more teens who are sexually active using birth control than in previous years.3, 4

Still, the US teen birth rate is substantially higher than in other western industrialized nations,5 and racial/ethnic and geographic disparities in teen birth rates persist.1,2

In 2019, the birth rates for Hispanic teens (25.3) and non-Hispanic Black teens (25.8) were more than two times higher than the rate for non-Hispanic White teens (11.4). The birth rate of American Indian/Alaska Native teens (29.2) was highest among all race/ethnicities.1 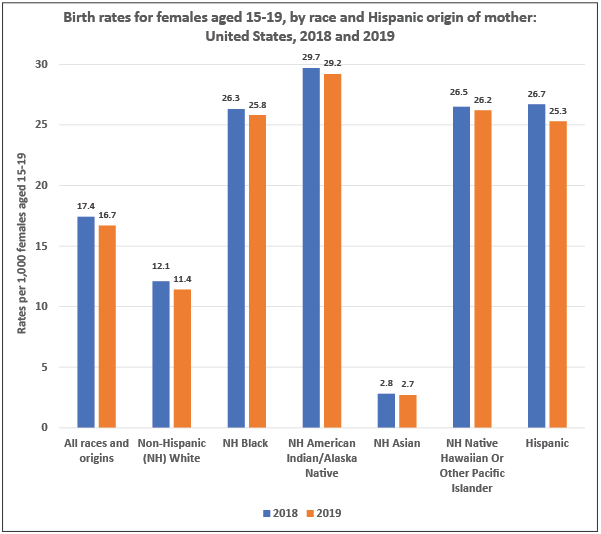 Social determinants of health, such as low education and low income levels of a teen’s family, may contribute to high teen birth rates.7 Teens in certain settings are at higher risk of teen pregnancy and birth than other groups. For example, young women living in foster care are more than twice as likely to become pregnant than young women not in foster care.8

To improve the life opportunities of adolescents facing significant health disparities and to have the greatest effect on overall US teen birth rates, CDC uses data to inform and direct interventions and resources to areas with the greatest need.

The Importance of Prevention

Teen pregnancy and childbearing are associated with increased social and economic costs through immediate and long-term effects on teen parents and their children.

Evidence-based teen pregnancy prevention programs have been identified by the US Department of Health and Human Services (HHS) Teen Pregnancy Prevention Evidence Reviewexternal icon, which used a systematic process for reviewing evaluation studies against a rigorous standard. The Evidence Review covers a variety of diverse programs, including sexuality education programs, youth development programs, abstinence education programs, clinic-based programs, and programs specifically designed for diverse populations and settings.  In addition to evidence-based prevention programs, teens need access to youth-friendly reproductive health services and support from parents and other trusted adults, who can play an important role in helping teens make healthy choices about relationships, sex, and birth control.  Efforts at the community level that address social and economic factors associated with teen pregnancy also play a critical role in addressing racial/ethnic and geographical disparities observed in teen births in the United States.