Toxoplasmosis is caused by the protozoan parasite Toxoplasma gondii. In the United States it is estimated that 11% of the population 6 years and older have been infected with Toxoplasma. In various places throughout the world, it has been shown that more than 60%  of some populations have been infected with Toxoplasma. Infection is often highest in areas of the world that have hot, humid climates and lower altitudes, because the oocysts survive better in these types of environments.

Toxoplasmosis is not passed from person-to-person, except in instances of mother-to-child (congenital) transmission and blood transfusion or organ transplantation. People typically become infected by three principal routes of transmission: 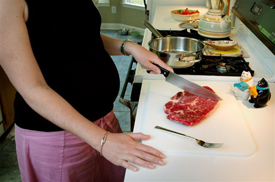 The tissue form of the parasite (a microscopic cyst consisting of bradyzoites) can be transmitted to humans by food. People become infected by:

Cats play an important role in the spread of toxoplasmosis. They become infected by eating infected rodents, birds, or other small animals. The parasite is then passed in the cat’s feces in an oocyst form, which is microscopic.

Kittens and cats can shed millions of oocysts in their feces for as long as 3 weeks after infection. Mature cats are less likely to shed Toxoplasma if they have been previously infected. A Toxoplasma-infected cat that is shedding the parasite in its feces contaminates the litter box. If the cat is allowed outside, it can contaminate the soil or water in the environment as well. 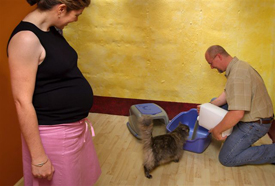 Have someone else clean the litter box. (Credit: CDC)

People can be infected by:

A woman who is newly infected with Toxoplasma during or just before pregnancy can pass the infection to her unborn child (congenital infection). The woman may not have symptoms, but there can be severe consequences for the unborn child, such as diseases of the nervous system and eyes.