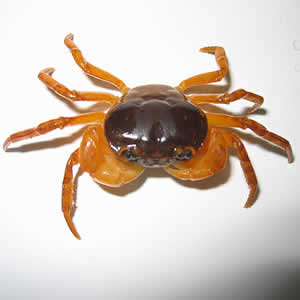 Fresh-water crabs like this one were implicated in a Paragonimus outbreak in January of 2007. Credit DPDx

Several species of Paragonimus cause most infections; the most important is P. westermani, which occurs primarily in Asia including China, the Philippines, Japan, Vietnam, South Korea, Taiwan, and Thailand. P. africanus causes infection in Africa, and P. mexicanus in Central and South America. Specialty dishes in which shellfish are consumed raw or prepared only in vinegar, brine, or wine without cooking play a key role in the transmission of paragonimiasis. Raw crabs or crayfish are also used in traditional medicine practices in Korea, Japan, and some parts of Africa.

Although rare, human paragonimiasis from P. kellicotti has been acquired in the United States, with multiple cases from the Midwest. Several cases have been associated with ingestion of uncooked crawfish during river raft float trips in Missouri.