There are three different filarial species that can cause lymphatic filariasis in humans. Most of the infections worldwide are caused by Wuchereria bancrofti. In Asia, the disease can also be caused by Brugia malayi and Brugia timori. 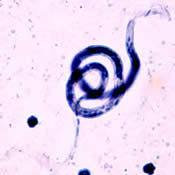 A wide range of mosquitoes can transmit the parasite, depending on the geographic area. In Africa, the most common vector is Anopheles and in the Americas, it is Culex quinquefasciatus. Aedes and Mansonia can transmit the infection in the Pacific and in Asia.

Many mosquito bites over several months to years are needed to get lymphatic filariasis. People living for a long time in tropical or sub-tropical areas where the disease is common are at the greatest risk for infection. Short-term tourists have a very low risk.

Programs to eliminate lymphatic filariasis are under way in more than 66 countries. These programs are reducing transmission of the filarial parasites and decreasing the risk of infection for people living in or visiting these communities.

Lymphatic filariasis affects over 120 million people in 72 countries throughout the tropics and sub-tropics of Asia, Africa, the Western Pacific, and parts of the Caribbean and South America.

In the Americas, only four countries are currently known to be endemic: Haiti, the Dominican Republic, Guyana and Brazil.

In the United States, Charleston, South Carolina, was the last known place with lymphatic filariasis. The infection disappeared early in the 20th century. Currently, you cannot get infected in the U.S.