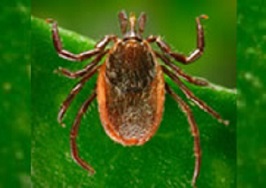 Outdoor workers are at risk of exposure to tick-borne diseases if they work at sites with ticks. Worksites with woods, bushes, high grass, or leaf litter are likely to have more ticks. Outdoor workers in most regions of the United States should be extra careful to protect themselves in the spring, summer, and fall when ticks are most active. Ticks may be active all year in some regions with warmer weather.

Protecting Yourself from Ticks and Mosquitoes:Cdc-pdf Print or order this free card for easy access to important safety information.