Stopping the Spread of Rabies in Haiti: CDC Partnership Succeeds at Saving Lives 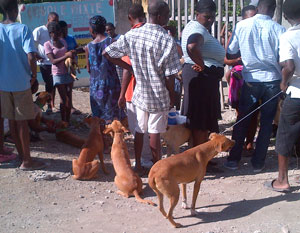 International public health partnerships can demonstrate success in many ways. However, every initiative aims to save lives and facilitate local adoption of the public health practices introduced.The Haiti Animal Rabies Surveillance Program (HARSP) recently witnessed a significant marker of success with a fast, efficient, locally-driven response to a potential rabies outbreak, likely saving lives. The fact that the CDC-Atlanta rabies team was not in Haiti at the time and had no immediate involvement demonstrates the local adoption of rabies awareness, detection, and response capacities.

CDC initiated HARSP in 2011, in the aftermath of the earthquake, first partnering with the Ministry of Agriculture and Rural Development (MARNDR) and the Ministry of Public Health and Population (MSPP) and now joined by Christian Veterinary Ministries, Humane Society International, and the Pan American Health Organization (PAHO). Haiti has the highest rate of human rabies in the Western Hemisphere, but a lack of knowledge and awareness about rabies and limited human diagnostic capacity leads to vast underreporting. It is estimated that 100 people die from rabies in Haiti every year, with dog bites responsible for nearly all human rabies cases. HARSP not only takes a OneHealth approach, combining human and animal disease control measures, but also embraces a multidisciplinary strategy combining efforts in governmental engagement, laboratory capacity, surveillance, mass vaccination, dog population control, and clinical and public education.

HARSP project team lead, Dr. Ryan Wallace, and colleagues Dr. Richard Franka and Dr. Stephanie Salyer, with support from the CDC Haiti Country Office, have trained more than 20 veterinary professionals in principles of rabies surveillance, safe animal capture, and humane euthanasia. As of March 2015, seven of these trainees were hired as official rabies control officers by MARNDR. The others are self-employed, applying the practices learned in the trainings to their local communities. In mid-February, Dr. Wallace visited the rabies control officers in Haiti to provide a refresher training and to encourage the expansion and decentralization of HARSP’s capacity. Currently, the trained officers are working in Port-au-Prince, Haiti’s capital city. In support of national and CDC goals, HARSP is working to provide coverage to at least 80% of the communities in Haiti’s most populated of ten districts. Recognizing that some of these communities are difficult to reach (more than an hour away from any rabies control officer), Dr. Wallace and the rabies officers developed a new approach for outreach to raise rabies awareness among responders and health providers in hard-to-reach communities. 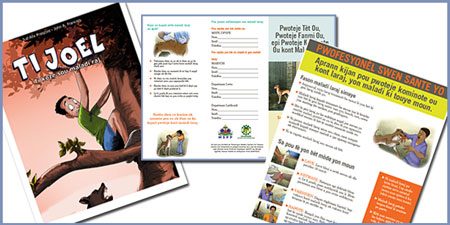 A few weeks after the CDC-supported refresher training, Dr. Natael Fenelon, a medical doctor with MSPP, reported that a sickly dog had bitten several people in the rural community of Arcahaie, a coastal town a few hours north of Port-au-Prince. Recognizing that this community was one of the targeted hard-to-reach communities, a HARSP rabies control officer, Mr. Pierre Dilius dispatched for further investigation. This event marked two important milestones for HARSP. First, it represented the natural expansion of HARSP activity beyond routine coverage areas. Second, it demonstrated the capacity of the HARSP infrastructure to respond to a remote rabies event with no on-site assistance from CDC-Atlanta’s rabies team. 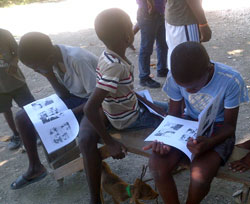 As the first component of the investigation, Mr. Dilius immediately recognized the symptoms of rabies in the offending dog and it was humanely euthanized. The second step of rabies investigations encompasses human rabies prevention; the officer identified a total of four people bitten by the offending dog who were referred to the medical center for rabies post-exposure prophylaxis. These are people who may have died if they had not been recognized and counseled. Mr. Dilius expanded his impact through community outreach, speaking with healthcare providers and local schools about rabies recognition and prevention.

The fruits of this effort would soon be realized, as only two weeks later, a school nurse educated by Mr. Dilius called HARSP to report an 8 year-old boy with symptoms of rabies. Several rabies control officers and Dr. Natael returned to Arcahaie to investigate, learning that the boy had been bitten by a dog in early February (the symptoms of rabies typically occur 1-3 months after transmission). At the time that the boy was bitten, weeks before Mr. Dilius’s outreach activities, his parents had never heard of rabies and did not bring the boy for post-exposure prophylaxis. Unfortunately, the boy died the day after the nurse made the phone call. While no diagnostic tests were available to confirm, clinical examination and the history of a dog bite indicate that he died of rabies.

Dr. Wallace and his colleagues have spent the past four years conducting trainings, establishing infrastructure, and working with medical and veterinary professionals to prepare for these kinds of events. While the seven rabies officers respond to an average of 150 rabies-suspect animals each month, this event was the first time they were put to the test of responding to a possible outbreak of animal rabies with human transmission. In a highly organized and rapid fashion, MARNDR, MSPP, and volunteer rabies control officers arrived in Arcahaie within 12 hours of the report of the young child with rabies. Through a joint, OneHealth investigation, the rabies officers and MSPP officials found an additional five people who were bitten by the same dog responsible for the boy’s death, and coordinated their vaccination. None had received rabies vaccination and none of the bite victims knew about rabies. MARNDR immediately mobilized voluntary vaccination teams and vaccinated more than 500 dogs in one day in this community. Dr. Natael and several MSPP colleagues conducted community surveys to better understand risk factors for rabies transmission in this community.

Public health success is measured in many ways. At first glance, it would appear that rabies prevention efforts failed, as an eight-year old boy died from a disease that has been vaccine-preventable for over 100 years. This is a failure of public health that occurs an estimated 59,000 times each year, globally. However, while this boy’s death was not prevented, HARSP located nine other people with rabies exposures in this small community and MSPP coordinated their vaccination; these are nine additional potential rabies deaths averted. This was the first large-scale, joint-ministerial rabies response effort in Haiti, and a hopeful indicator of effective responses to come.

There are thousands communities just like Arcahaie in Haiti. When asked, Dr. Wallace can list numerous sad and tragic stories of rabies victims, all too many like the eight year-old boy living on the coast north of Port-au-Prince. But the collective efforts of dedicated public health professionals from CDC and the Government of Haiti may put an end to those stories. Their shared vision is for Haitians to sustain all components of rabies preventive education and outreach, vaccination, and life-saving response in priority communities around the country. Through HARSP’s training and system development, and the leadership of the Government of Haiti, the country is poised to change the trend of rabies in its country and perhaps one day see the elimination of this horrific disease.