How Does Loud Noise Cause Hearing Loss?

Noise can damage hair cells, membranes, nerves, or other parts of your ear. This can cause temporary or permanent hearing loss. Learn how this happens so that you can prevent hearing loss.

Hearing Loss Can Be Temporary or Permanent

Loud noise is particularly harmful to the inner ear (cochlea). A one-time exposure to extreme loud sound or listening to loud sounds for a long time can cause hearing loss. Loud noise can damage cells and membranes in the cochlea. Listening to loud noise for a long time can overwork hair cells in the ear, which can cause these cells to die. The hearing loss progresses as long as the exposure continues. Harmful effects might continue even after noise exposure has stopped. Damage to the inner ear or auditory neural system is generally permanent.

Damaged Hair Cells in Your Ears Can Lead to Hearing Loss

The average person is born with about 16,000 hair cells within their cochlea. These cells allow your brain to detect sounds. Up to 30% to 50% of hair cells can be damaged or destroyed before changes in your hearing can be measured by a hearing test. By the time you notice hearing loss, many hair cells have been destroyed and cannot be repaired.

After leaving a very loud event, such as a concert or football game, you may notice that you don’t hear as well as before. You might not hear whispers, sound might seem muffled, or you may hear ringing in your ears. Normal hearing usually returns within a few hours to a few days. This is because the hair cells, similar to blades of grass, will bend more if the sound is louder. But they will become straight again after a recovery period.

Noise Can Also Damage Nerves in Your Ears

In addition to damaging hair cells, noise can also damage the auditory nerve that carries information about sounds to your brain. Early damage may not show up on your hearing test. It can create a ‘hidden hearing loss’ that may make it difficult for you to understand speech in noisy places. The effect of loud noise over time affects how well you might hear later in life. It also affects how quickly you might develop hearing problems, even after exposure has stopped.

How Do We Hear?

We hear sound because of vibrations (sound waves) that reach our ears. We recognize those vibrations as speech, music, or other sounds.

Middle Ear
The eardrum vibrates from the incoming sound waves and sends these vibrations to three tiny bones in the middle ear. These bones amplify, or increase, the sound vibrations and send them to the inner ear.

Inner Ear
The inner ear contains a snail-shaped structure filled with fluid called the cochlea. Sound vibrations create waves in the cochlear fluids. As the waves peak, they cause tiny hair cells to bend, which converts the vibrations into electrical signals. These tiny hair cells are called stereocilia (types of receptors that can detect sound).

Auditory Nerve
The auditory nerve carries the electrical signals from the inner ear to the brain. The brain interprets the signals as sound that you recognize and understand. 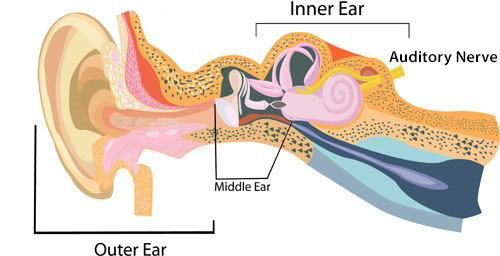