While melioidosis infections have taken place all over the world, Southeast Asia and northern Australia are the areas in which it is primarily found. In the United States, the bacteria that causes melioidosis has been identified in Mississippi, Puerto Rico and the U.S. Virgin Islands.

The greatest numbers of melioidosis cases are reported in:

Cases are also frequently reported in:

Outside of Asia and Australia, cases have been reported in: 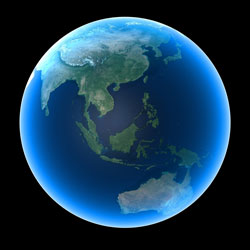