A Century of U.S. Water Chlorination and Treatment: One of the Ten Greatest Public Health Achievements of the 20th Century 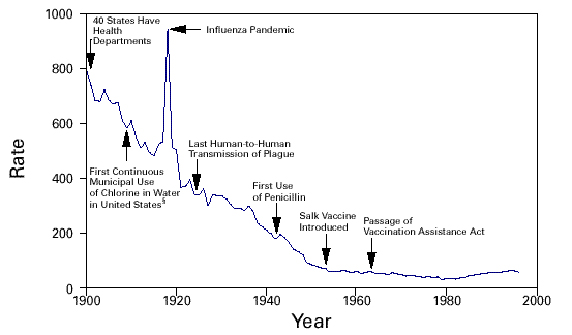 The occurrence of diseases such as cholera and typhoid dropped dramatically. In 1900, the occurrence of typhoid fever in the United States was approximately 100 cases per 100,000 people. By 1920, it had decreased to 33.8 cases per 100,000 people. In 2006, it had decreased to 0.1 cases per 100,000 people (only 353 cases) with approximately 75% occurring among international travelers. Typhoid fever decreased rapidly in cities from Baltimore to Chicago as water disinfection and treatment was instituted. This decrease in illness is credited to the implementation of drinking water disinfection and treatment, improving the quality of source water, and improvements in sanitation and hygiene.

It is because of these successes that we can celebrate over a century of public drinking water disinfection and treatment – one of the greatest public health achievements of the 20th century.