Mendelian Randomization: Using Genetics to Study Behaviors and Environments that Cause Disease

Mendelian randomization studies examine how certain behaviors, environments, or other factors lead to specific health outcomes by looking at genetic differences that affect the way people’s bodies react to the behavior, environment, or other factor.

Why use Mendelian Randomization?

An important part of public health research is looking at whether behaviors, environments, and other factors, which can sometimes be changed, make people more likely to get certain diseases. However, showing that these factors cause a specific disease presents challenges.

In some studies, researchers compare people with and without a certain disease to look for behaviors, environments, and other factors that are linked to disease. In other studies, researchers compare health outcomes in people with and without a specific behavior, environment, or other factor to see if one group is more or less likely to develop a disease. The researchers are not able to control who has which behavior, environment, or other factor. Accurately measuring some behaviors, such as how much a person smokes or uses alcohol, can be difficult. In some cases, one factor is linked to other factors, and figuring out which one is the cause can be hard. For example, people who have higher alcohol use also tend to smoke more, so a link found between alcohol use and a health outcome might actually be due to smoking causing the outcome. Some factors can be present because of the disease itself, meaning that they are caused by the disease rather than leading to it. For example, as people get sick, they might tend to smoke less, so that decreased smoking might be associated with worsening of disease, even though in reality the decrease in smoking does not make the disease worse. These issues can mean that findings from one study are not repeated in later studies or that different studies can have findings that do not agree.

The gold standard for studying whether behavioral, environmental, or other factors cause disease is randomized controlled trials (RCTs). RCTs involve randomly assigning participants to one of two or more groups that differ by one factor. For example, those in a group either do or do not perform a certain behavior, are or are not exposed to a specific environmental factor, or do or do not receive a treatment. However, RCTs are costly, take a long time, and are not always possible due to ethical or other concerns, such as those related to assigning a group of people to perform an unhealthy behavior. RCTs are often used to confirm findings from other studies, and due to the cost of conducting RCTs, it is important to have the best evidence available from other study designs prior to starting an RCT. Mendelian randomization studies can help provide this evidence. 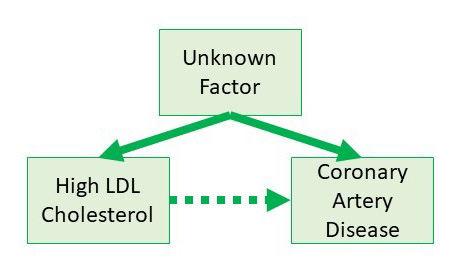 Using a Mendelian randomization approach, scientists could look at genetic differences that affect LDL cholesterol levels to see if these variants make people more likely to develop coronary artery disease. The unknown factor would not influence which genetic difference is inherited.

For example, people with familial hypercholesterolemia have genetic changes that increase their blood levels of LDL cholesterol. These genetic changes are linked to an increased risk of coronary artery disease, which provides evidence that high LDL levels can cause heart disease.

How does Mendelian Randomization work?

Mendelian randomization is one of many examples of how genetic approaches can help increase our understanding of the causes of disease. This approach has not been fully utilized in public health so far and finding genetic differences that result in effects similar to behaviors, environments, or other factors of interest can be challenging. In addition, showing that the genetic difference results in the health outcome through its effect on the behavior, environment, or other factor, not through a different pathway, can be challenging. Nonetheless, Mendelian randomization promises to be a helpful tool for future public health research.