People who contracted the disease developed swollen, painful abdomens and then lost weight. Some of them had trouble breathing as the fluid in their abdomens crowded against their lungs. Three or four family members in one household might become ill, while others living in the same household did not. However, in some families, everyone died from the disease. Children as young as two years old could be healthy and active, but three days later, their abdomens were swollen with up to four liters of fluid. After a while, they became too weak to move.

People were ill, even dying, from an illness that demonstrated symptoms commonly seen in liver disease. But what was causing it?

Home in the rural area of Tigray

This was the situation in Tigray in 2007, when the Ethiopia Ministry of Health and Ethiopia Health and Nutrition Research Institute (EHNRI) asked CDC’s Health Studies Branch and other partners to help them investigate the outbreak of what was then called “unidentified liver disease(ULD).”

Since 2005, more than 1,200 people had been diagnosed with the condition and many had died. The joint epidemiologic investigation in 2007 ruled out infectious diseases as the cause and suggested that the disease may be related to food people were eating. But EHNRI already suspected that the cause of the outbreak was something in the environment.

Martin has vivid memories of her time in Ethiopia. “It was so sad to see small children with their swollen bellies, so sick they could not move,” she said. But these conditions just made her more determined.

Scientists believed that the cause of the outbreak might be exposure to toxic PAs from eating contaminated grain or animal products, but too many uncertainties remained. The levels of PAs in grain samples were too low to cause acute or chronic illness and had never been associated with toxicity before.

Doctors had not been able to document completely the course of the disease in patients. Epidemiologic risk factors for illness were unclear. No laboratory test existed that could evaluate human serum (blood) for evidence of PA exposure.

Field workers set off on their long walk to collect data.

HS epidemiologists knew they needed more information to come to solid conclusions, so they recommended collecting more grain and other food samples for testing, establishing a surveillance system, and collecting additional evidence from ULD patients to better describe characteristics of the disease.

CDC′s mission, simply put, is to keep Americans safe and healthy where they work, live, and play. Scientists and disease detectives work around the world to track diseases, research outbreaks, respond to emergencies of all kinds, and use what they learn from this work to develop and advocate public health policies that strengthen America′s health and resilience. 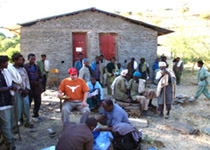 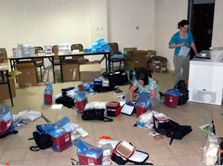 Colleen Martin and Danielle Rentz organize supplies for field Workers. Later, they would turn this room into a 'lab,' complete with centrifuge and freezer. 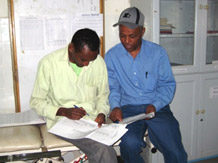