This guideline was based on a targeted systematic review of the best available evidence on the prevention and control of norovirus gastroenteritis outbreaks in healthcare settings. The Grading of Recommendations Assessment, Development and Evaluation (GRADE) approach was used21-24 to provide explicit links between the available evidence and the resulting recommendations. Methods and/or details that were unique to this guideline are included below.

First, an electronic search of the National Guideline Clearinghouse, MEDLINE, EMBASE, the Cochrane Health Technology Assessment Database, the NIH Consensus Development Program, and the National Institute for Health and Clinical Excellence, the Scottish Intercollegiate Guidelines Network and the United States Preventive Services Task Force databases was conducted for existing national and international guidelines relevant to norovirus. The strategy used for the guideline search and the search results can be found in Appendix 1A. A preliminary list of key questions was developed from a review of the relevant guidelines identified in the search.25-49 Key questions were put in final form after vetting them with a panel of content experts and HICPAC members. An analytic framework depicting the relationship among the key questions is included in Figure 1.

Following the development of the key questions, search terms were developed for identifying literature most relevant to those questions. For the purposes of quality assurance, these terms were compared to those used in relevant seminal studies and guidelines. These search terms were then incorporated into search strategies for the relevant electronic databases. Searches were performed in MEDLINE, EMBASE, CINAHL, the Cochrane Library, Global Health and ISI Web of Science (all databases were searched to the end of February 2008), and the resulting references were imported into a reference manager, where duplicates were resolved. The detailed search strategy used for identifying primary literature and the results of the search can be found in Appendix 1B.

Titles and abstracts from references were screened by a single reviewer (T.M. or K.B.S.). Full text articles were retrieved if they were

To be included, studies had to measure ≥ 1 clinically relevant outcome. For Key Questions 1 and 3, this included symptoms of norovirus infection, or stool antigen, virus, or EM results. For Key Question 2, this included any study published after 1997 that reported test characteristics (e.g., sensitivity, specificity, predictive values, likelihood ratios). Outbreak descriptions were included if:

Full-text articles were screened by two independent reviewers (T.M., and I.L., or K.B.S.) and disagreements were resolved by discussion. The results of this process are depicted in Figure 2. 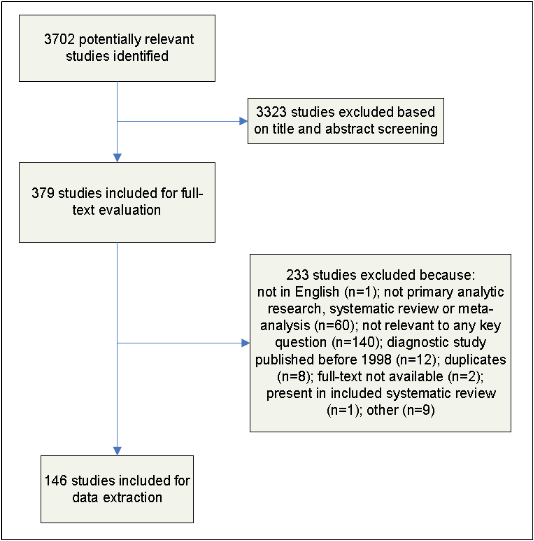 For those studies meeting inclusion criteria, data on the study author, year, design, objective, population, setting, sample size, power, follow-up, and definitions and results of clinically relevant outcomes were extracted into standardized data extraction forms (Appendix 3). From these, three evidence tables were developed, each of which represented one of the key questions (Appendix 2). Studies were extracted into the most relevant evidence table. Then, studies were organized by the common themes that emerged within each evidence table. Data were extracted by a single author (R.K.A or I.L.) and cross-checked by another author (R.K.A or I.L.). Disagreements were resolved by the remaining authors. Data and analyses were extracted as originally presented in the included studies. Meta-analyses were performed only where their use was deemed critical to a recommendation and only in circumstances in which multiple studies with sufficiently homogenous populations, interventions, and outcomes could be analyzed. Systematic reviews were included in this review. To avoid duplication of data, primary studies were excluded if they were also included in a systematic review captured through the broader search strategy. The only exception to this was if the primary study also addressed a relevant question that was outside the scope of the included systematic review. Before exclusion, data from primary studies that were originally captured were abstracted into the evidence tables and reviewed. Systematic reviews that analyzed primary studies that were fully captured in a more recent systematic review were excluded. The only exception to this was if the older systematic review also addressed a relevant question that was outside the scope of the newer systematic review. To ensure that all relevant studies were captured in the search, the bibliography was vetted by a panel of content experts. For the purposes of the review, statistical significance was defined as p ≤ 0.05.

For all other methods (i.e., Grading of Evidence, Formulation of Recommendations, and Finalizing of the Guideline) please refer to the [This link is no longer active: “Guideline Methods supplement” Similar information may be found at Umscheid CA, Agarwal RK, Brennan PJ, Healthcare Infection Control Practices Advisory Committee. Updating the guideline development methodology of the Healthcare Infection Control Practices Advisory Committee (HICPAC). American journal of infection control. 2010;38(4):264-273.]

Future revisions to this guideline will be dictated by new research and technological advancements for preventing and managing norovirus gastroenteritis outbreaks.