Background: The Centers for Disease Control and Prevention’s (CDC) Influenza Division collects and analyzes influenza surveillance data year-round and produces a weekly report on U.S. influenza activity during the influenza season which begins at week 40 each year. The U.S. influenza surveillance system provides information in five categories collected from eight data sources. This is the first report of the 2014-2015 influenza season, which began on September 28, 2014, and also summarizes influenza activity in the United States during the summer weeks of the 2013-14 season.

The five categories and eight data components of CDC influenza surveillance are:

Starting during week 40 (week ending October 4, 2014) of the 2014-2015 season, virologic surveillance data from approximately 120 additional NREVSS laboratories will be added to the national influenza laboratory surveillance system. Please note that historical data from these additional NREVSS laboratories will not be added to previous influenza seasons, including the 2013-2014 season.

Of the 126 influenza B viruses collected and analyzed during this period, 95 (75%) belonged to the B/Yamagata-lineage, and were antigenically similar to the B/Massachusetts/2/2012 virus, the influenza B component for the 2014–2015 Northern Hemisphere trivalent vaccine. The remaining 31 viruses (25%) belonged to the B/Victoria lineage and were antigenically similar to the B/Brisbane/60/2008 virus, the B/Victoria-lineage component of the 2014–2015 Northern Hemisphere quadrivalent influenza vaccine.

No antiviral resistance data is available for specimens collected after October 1, 2014. During May 18 – September 27, 2014, 229 specimens (six 2009 H1N1, 113 influenza A (H3N2), and 110 influenza B viruses) collected in the United States were tested for susceptibility to the neuraminidase inhibitors (oseltamivir and zanamivir), none of the tested viruses were found to be resistant to either oseltamivir or zanamivir.

During week 40, 5.4% of all deaths reported through the 122 Cities Mortality Reporting System were due to P&I. This percentage was below the epidemic threshold of 6.0% for week 40.

Nationwide during week 40, 1.3% of patient visits reported through the U.S. Outpatient Influenza-like Illness Surveillance Network (ILINet) were due to influenza-like illness (ILI). This percentage is below the national baseline of 2.0%.

During week 40, the following ILI activity levels were experienced:

During week 40, the following influenza activity was reported: 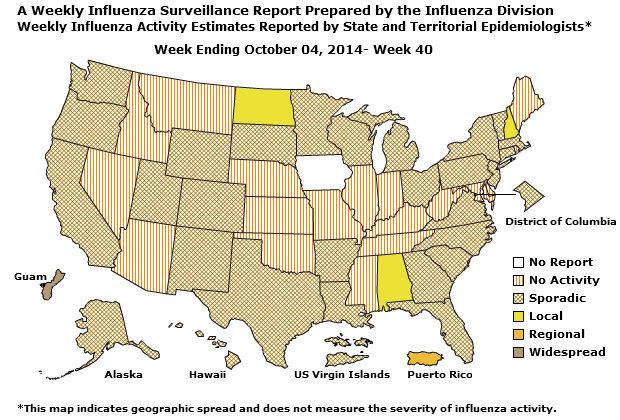 <!-- <p>A description of surveillance methods is available at: http://www.cdc.gov/flu/weekly/overview.htm --!>