Good morning Chairman Stupak, Ranking Member Whitfield, and distinguished members of the Subcommittee. My name is Dr. Leonard Paulozzi, and I am a medical epidemiologist with the Centers for Disease Control and Prevention (CDC), an agency of the Department of Health and Human Services (HHS).Thank you for the opportunity to appear before you on behalf of CDC to discuss our Agency′s research and prevention activities addressing unintentional poisoning deaths. Thank you also for your continued support of CDC′s goal of healthy people throughout all stages of their lives.

Today, our nation and the world are focused on threats such as pandemic influenza, natural disasters, and terrorism. While these threats require and deserve our immediate attention, we cannot lose sight of the pressing realities of public health issues that we face every day, such as unintentional poisonings, which are now the second leading cause of unintentional injury death, exceeded only by motor vehicle fatalities.

A poison is any substance that is harmful to your body when ingested (eaten), inhaled (breathed), injected, or absorbed through the skin. Any substance taken in excess, including a prescription drug, can be a poison.Therefore, the CDC categorizes drug overdoses as drug poisonings. Drug poisoning does not include adverse reactions to medications taken in the correct amounts.

Today, my remarks will pertain to unintentional drug poisonings. I will focus on fatal drug-related poisonings because such events are extensively investigated, coded in a standardized way, and available for analysis in annual mortality files created by CDC′s National Center for Health Statistics (NCHS). I will discuss data through 2004, the latest year for which mortality statistics are available for the United States in this extensive level of detail.

The mortality rates from drug poisoning (not including alcohol) have risen steadily since the early 1970s. Over the past ten years they have reached historic highs. Rates are currently more than twice what they were during the peak years of crack cocaine mortality in the early 1990s, and 4 to 5 times higher than the rates during the year of heroin mortality peak in 1975. This upward trend has continued through 2004.

During most of the 1990s, the categorization of drug poisoning deaths did not allow easy distinction between deaths caused by prescription drugs and deaths caused by street drugs. Major data categories included opiates, cocaine, other drugs, and unspecified drugs. During this time period, rates rose in all major categories, including opiates and cocaine. The label “opiates” did not distinguish between heroin and prescription opiates (also known as opioid analgesics) so it was difficult to determine how much of the change in opiate deaths was attributed to heroin and how much to prescription opioid analgesics. Prescription drugs used for psychotherapeutic purposes (including sedatives and antipsychotic drugs) also caused an increasing number of deaths during the 1990s, but such deaths represented a much smaller share of the total than deaths attributed to opiates.

Beginning with 1999 data, a new coding protocol was introduced that combined heroin, prescription opioids, and cocaine into one category called “narcotics,” and combined “other” and unspecified drugs into another category. Sedatives and other psychotherapeutic drugs continued to be tracked separately.Increases in death from these categories of drugs, as seen during the 1990s, continued from 1999 through 2004. By 2004, at least 20,000 unintentional drug poisoning deaths occurred annually in the United States. By comparison, just over 17,000 homicides occurred that year.

The new coding protocol also allowed researchers to determine specifically which drugs were involved in these deaths by allowing disaggregation of the “narcotics” and “other/unspecified” categories into their 3 largest components: opioid analgesics, cocaine, and heroin. Opioid analgesics include derivatives from opium, such as oxycodone or hydrocodone, as well as synthetic drugs with similar action, such as methadone. Analysis of these data, published last year, showed that the slow increase in cocaine-related mortality seen earlier continued after 1999, while the number of deaths involving heroin stabilized. In contrast, the number of deaths involving prescription opioid analgesics increased from roughly 2,900 in 1999 to 7,500 in 2004, an increase of 160% in just 5 years.By 2004, opioid painkiller deaths numbered more than the total of deaths involving heroin and cocaine. For the first time, it became apparent that prescribed controlled substances were driving the upward trend in drug poisoning mortality.

Characteristics of Those Dying from Drug Poisoning 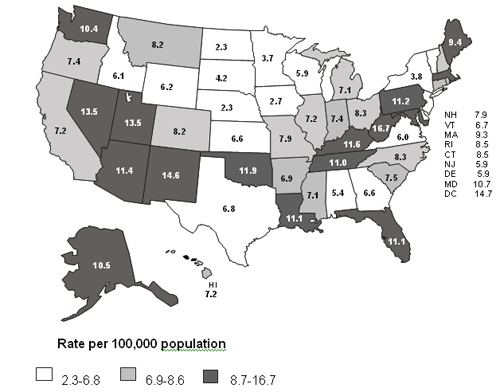 In contrast, 1990 rates in rural states were some of the lowest in the nation.In a paper published in the American Journal of Prevention Medicine last year, CDC showed that there was a statistically significant correlation between state drug poisoning rates and state sales of prescription opioids.There was almost a four-fold difference among states in their use of opioid analgesics. States with the highest distributions tended to be those with the highest drug poisoning mortality rates.

Drug poisoning rates were twice as high for men than for women in 2004. The group at highest risk for drug poisoning death is middle-aged men, the same demographic group that historically has had high rates of fatal heroin overdoses. Rates were higher for whites (7.2 per 100,000) than for African Americans (6.6 per 100,000). The highest rate was among those aged 35-44 years. Rural areas now have rates comparable to those in urban areas as a result of greater rate increases in rural counties than in urban counties since 1999. These patterns also hold true when studying deaths involving prescription opioid analgesics.

Why are Deaths Occurring?

There are certainly exceptions, but most unintentional drug poisoning deaths are not “accidents” caused by toddlers or the elderly taking too much medication.Mortality statistics suggest that these deaths are largely due to the misuse and abuse of prescription drugs. Such statistics are backed up by studies of the records of state medical examiners.Such studies consistently report that a high percentage of people who die of prescription drug overdoses have a history of substance abuse.

These findings are consistent with annual surveys from HHS′s Substance Abuse and Mental Health Services Administration (SAMHSA) that have reported increasing rates of nonmedical use of prescription drugs, especially opioid analgesics, during the same time period when mortality was rising. “Nonmedical use” was defined as use without a prescription of the individual′s own or simply for the experience or feeling that the drugs caused.The 2006 SAMHSA National Survey on Drug Use and Health found that 2.1 percent of the U.S. population age 12 or older had used prescription pain relievers such as opioid analgesics for nonmedical purposes in the past month. That amounts to 5.2 million nonmedical users in a typical month. However, the change in the rate of current nonmedical use of pain relievers between 2005 and 2006 (1.9 and 2.1 percent, respectively) was not statistically significant. Interestingly, by comparison, CDC′s National Health and Nutrition Examination Survey found that about 9 million Americans reported use of opioid analgesics for medical purposes in a typical month.

Because the process of death certificate completion, collection, correction, and computerization for 2.4 million deaths annually is laborious and time-consuming, final information on mortality for the nation as a whole is only available through 2004. However, the overall drug poisoning mortality trend closely tracked the rapid rise in sales of opioid analgesics per capita recorded by the Drug Enforcement Administration (DEA) from 1997 through 2004. And sales of opioid analgesics rose in 2005 and 2006. Therefore, we are likely to see additional increases in the drug poisoning mortality rate during 2005 and 2006. Indeed, preliminary information from NCHS indicates that the unintentional poisoning rate, which largely tracks the unintentional drug poisoning mortality rate, did increase in 2005. Moreover, rates of nonfatal emergency department visits for poisoning from the National Electronic Injury Surveillance System show an upward trend from 2004 to 2006, although NSDUH data from 2006 does not show a statistically significant increase from 2005 to 2006.

Based on what we know now, possible interventions could include:

1) Using insurance mechanisms to modify the behavior of patients using dangerous amounts of prescription drugs. A number of states use information about drug use collected on their Medicaid populations to identify high-volume users. They have options such as “locking in” such users to a single provider and a single pharmacy to reduce the likelihood of “doctor shopping,” a term used to describe prescription abusers who visit multiple doctors until they get the desired amount of narcotics.

2) Educating physicians and pharmacists to more closely monitor patients who are taking opioid painkillers on a long-term basis. Existing literature describes how this can be done, including the use of doctor-patient contracts and pill counts. This is difficult in some settings such as emergency departments, where there may be no long-term doctor-patient relationship. Unfortunately, about 40% of the prescribing of opioid analgesics in outpatient settings is done in emergency departments.

3) Using opioid analgesics more judiciously, e.g., reducing the use of strong painkillers when weaker ones would suffice, and following proper prescribing practices for FDA-approved indications versus “off label“ uses of these drugs.

4) Modifying the drugs themselves so they are more difficult to crush and dissolve in preparation for injection, a mode of use favored by some opioid abusers.

Recently, CDC staff conducted a field investigation of drug overdose deaths in West Virginia, the state with the highest drug poisoning mortality rate in 2004. We will be publishing information about the characteristics of those deaths and the implicated drugs. Part of this investigation involved examining PMP records that had been obtained by the state medical examiner for these decedents. Those records will help characterize the prescription history of people dying from prescribed drugs. This investigation will support the critical need for more detailed information about how the people misusing these drugs are obtaining them.

Finally, CDC is working with the Association of State and Territorial Health Officials to survey a sample of state health officers about their state policy responses to this problem.Their experience with such preventive measures may be useful to other states.

Unintentional drug poisonings are a significant and worsening public health problem. CDC continues to respond to this problem through state surveillance activities, epidemiologic research and evaluation of potential interventions.

Thank you for the opportunity to discuss this important public health issue today. Thank you also for your continued interest in and support of CDC′s unintentional poisoning activities. I will be happy to answer any questions.

⊃2;There are about 3,000 undetermined deaths and 20,000 unintentional drug deaths per year. The map includes data for both because medical examiners in some states report all drug overdoses as undetermined intent.