Pneumococcal Vaccination: What Everyone Should Know

Who Should Get Pneumococcal Vaccines?

Talk to your or your child’s doctor about what is best for your specific situation.

CDC recommends PCV13 or PCV15 for

For those who have never received any pneumococcal conjugate vaccine, CDC recommends PCV15 or PCV20 for

Who Might Not Be Able to Get These Vaccines?

Because of age or health conditions, some people should not get certain vaccines or should wait before getting them. Read the guidelines below specific to pneumococcal vaccines and ask your or your child’s doctor for more information.

In addition, tell the person who is giving you or your child a pneumococcal vaccine if:

You or your child have had an allergic reaction to an earlier pneumococcal shot or have any severe, life-threatening allergies.

You or your child are not feeling well.

What Types of Pneumococcal Vaccines Are There?

There are 4 pneumococcal vaccines licensed for use in the United States by the Food and Drug Administration:

How Well Do These Vaccines Work?

PCV15 and PCV20 are new vaccines, so there are no data on how well these vaccines work in real-world conditions. However, these vaccines were approved because clinical trial data indicate they cause an immune response similar to PCV13, which has been shown to protect against serious pneumococcal infections.

Studies* show that getting at least 1 shot of PCV13 protects:

Studies* show that getting 1 shot of PPSV23 protects:

Some pneumococcal infections are “invasive.” Invasive disease means that germs invade parts of the body, such as blood, that are normally free from germs. Invasive disease is usually very serious and can sometimes result in death.

In a California study, PCV7 protected more than 9 in 10 babies from invasive disease caused by vaccine serotypes. The children who got the vaccine also had fewer ear infections and fewer ear tubes placed. The study also showed the vaccine prevented pneumonia in children.

Another study showed that receiving at least one shot of PCV13 protects 4 in 5 babies from invasive disease caused by vaccine serotypes. This protection was similar among children with and without medical conditions that put them at increased risk of pneumococcal disease. The vaccine is also effective at preventing antibiotic-resistant pneumococcal infections caused by vaccine serotypes. 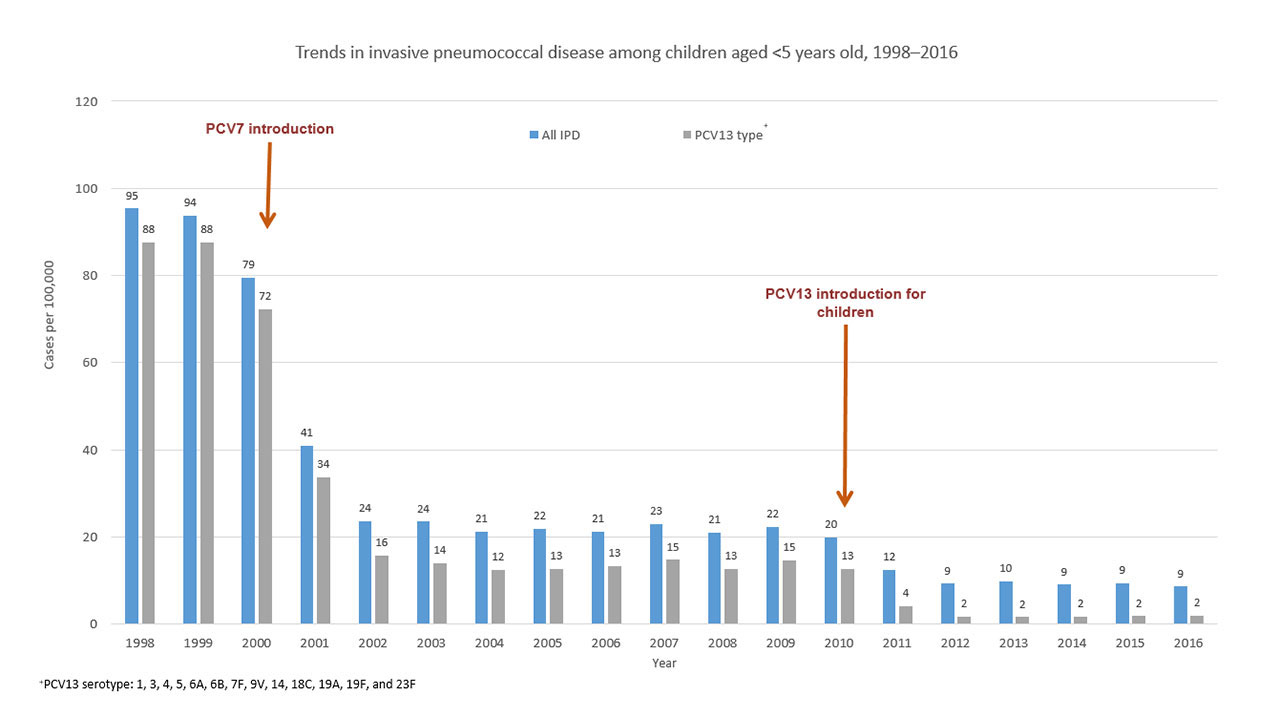 View Larger
The United States saw large drops in rates of invasive pneumococcal disease caused by serotypes included in pneumococcal vaccines (PCV7 and PCV13) after routine use of the vaccines began for children, per CDC’s Active Bacterial Core surveillance data.

Rates of invasive pneumococcal disease caused by the serotypes in PCV7 declined by 99% in the United States since 2000. Unvaccinated people of all ages, including babies too young to get the vaccine, have seen decreases in disease. Since it helps protect unvaccinated people, this shows the vaccine decreased the bacteria’s spread in the community. Rates of invasive pneumococcal disease caused by some serotypes not in PCV7 increased between 2000 and 2010. However, these increases were small compared to the decreases in serotypes in the vaccine. Also, PCV13 covers the main serotypes that caused the increases. Thus, rates of disease caused by these serotypes declined once PCV13 replaced PCV7 in 2010. Experts estimate PCV13 prevented more than 30,000 cases of invasive pneumococcal disease and 3,000 deaths in its first 3 years of use.

In 2011, FDA licensed PCV13 for use in adults 50 years or older. A study in the Netherlands included approximately 85,000 adults 65 years or older. In this study, PCV13 protected 3 in 4 of those vaccinated against invasive pneumococcal disease caused by vaccine serotypes. PCV13 also protected 9 in 20 vaccinated against pneumococcal pneumonia caused by vaccine serotypes.

In 2022, FDA licensed PCV15 for use in children 6 weeks through 17 years old. This was based on clinical trial data showing PCV15

Studies show PPSV23 protects between 6 to 7 in 10 adults with healthy immune systems against invasive disease caused by vaccine serotypes.

What Are the Possible Side Effects?

Most people who get a pneumococcal vaccine do not have any serious problems with it. With any medicine, including vaccines, there is a chance of side effects. These are usually mild and go away on their own within a few days, but serious reactions are possible.

Mild problems following PCV13, PCV15, or PCV20 can include:

Mild problems following PPSV23 can include:

If these problems occur, they usually go away within about 2 days.

Problems that Could Happen After Getting Any Injected Vaccine

Where Can I Find These Vaccines?

Your doctor’s office is usually the best place to receive recommended vaccines for you or your child.

PCV13 and PCV15 are part of the routine childhood immunization schedule. Therefore, at least one of these vaccines is regularly available for children at:

If your doctor does not have pneumococcal vaccines for adults, ask for a referral.

Pneumococcal vaccines may also be available for adults at:

You can also contact your state health department to learn more about where to get pneumococcal vaccines in your community.

When receiving any vaccine, ask the provider to record the vaccine in the state or local registry, if available. This helps doctors at future encounters know what vaccines you or your child have already received.

How Do I Pay for These Vaccines?

People can pay for pneumococcal vaccines in several ways:

Medicare Part B covers 100% of the cost for two different pneumococcal vaccines (when administered at least 12 months apart).

The Vaccines for Children (VFC) Program provides vaccines to children whose parents or guardians may not be able to afford them. A child is eligible if they are younger than 19 years old and meets one of the following requirements:

If your child is VFC-eligible, ask if your doctor is a VFC provider. For help in finding a VFC provider near you, contact your state or local health department’s VFC Program Coordinator or call CDC at 1-800-CDC-INFO (232-4636).