The indigenous people of the Americas—American Indians and Alaska Natives (AI/ANs)—have practiced the art of medicine and wellness for many thousands of years. Therefore, it is no surprise that they have made substantial contributions to public health. This page has been created to honor and bring recognition to these accomplishments.

Do you have another great example of AI/AN contributions to public health? Please share it with us by emailing cstltsfeedback@cdc.gov. 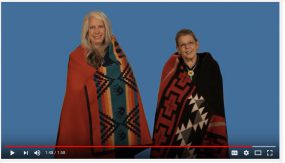 Watch Delight Satter and Dr. Seh Welch talk about how their Native heritage is intertwined with their work at CDC

The environmental impact of climate change poses a significant threat to the health of communities worldwide, putting the foods we eat, the water we drink, and the air we breathe at risk. For the Swinomish Indian Tribal Communityexternal icon, preserving first foods from the effects of climate change is of particular concern. First foods, also known as traditional foods, include salmon, crabs, clams, wild plants, and other foods that are integral to the tribe’s health, well-being, and history. Hunting, harvesting, and preparing these first foods not only provides nourishment, but also upholds cultural values and traditions through jobs, intergenerational storytelling, and sense of community.

To study the potential effects of climate change on first foods, researchers from the Swinomish Indian Tribal Community undertook an innovative, value-based health assessment that incorporated the tribe’s priorities, values, and needs throughout the research process. Read more about this project in CDC’s Field Notes.

The opioid overdose epidemic in the United States has led to a dramatic increase in infections associated with injection drug use, particularly hepatitis C virus (HCV) infection. The Eastern Band of Cherokee Indians (EBCI)external icon in North Carolina is one of many communities experiencing this surge in hepatitis C. After conducting a tribal health assessment in 2018, EBCI made hepatitis C prevention one of the tribe’s top 10 public health priorities.

The rising rate of hepatitis C, coupled with an increase in injection drug use, prompted EBCI health officials to create the Tsalagi Public Health Syringe Services Programexternal icon in 2018. This comprehensive harm reduction initiative aims to decrease the spread of bloodborne infections while also enabling people who inject drugs to access referrals for substance use disorder treatment, medical care, and other community services. Read more about this program in CDC’s Field Notes.

Recruited from communities they serve, community health aides are frontline workers, providing preventive and primary health care to America’s diverse communities. Alaska’s Community Health Aide Programexternal icon has been in operation since the 1950s, and its practitioners are the backbone of rural and frontier health care in Alaska, delivering primary, dental, and behavioral health care. The Alaska Native Tribal Health Consortiumexternal icon, the largest tribal health organization in the United States, manages the statewide medical and public health services of the Alaska Native healthcare system. The effectiveness of care delivery has become a model and is often cited as exemplary.

Development and Worldwide Use of the Hib Conjugate Vaccine

Haemophilus influenzae type b (Hib) is a bacterium that can cause severe infection, mostly in infants and children younger than age 5. The disease can be deadly or cause lifelong disability, and some of the highest rates of Hib disease in history were reported among AI/AN populations. In the 1980s, the Navajo Nationexternal icon and White Mountain Apache Tribeexternal icon were instrumental in the development of the Hib conjugate vaccine by participating in clinical trials to study the vaccine’s effectiveness. The vaccine trials were led by Dr. Mathuram Santosham, founder and director for the Center for American Indian Healthexternal icon, and he later received the 2014 John Fries Prize for Improving Healthexternal icon for this research. In his acceptance speech, Dr. Santosham said, “I want to thank the White Mountain Apache and Navajo tribes and all who have worked with us to prove the efficacy of the Hib vaccine and promote its use worldwide.” As a result of this critical contribution, almost every country in the world has made the decision to use the Hib conjugate vaccine. GAVI, an international alliance created to improve access to vaccines for children in poor countries, estimates that by the year 2020, approximately 7 million lives will be saved as a result of the vaccine.

Born on the Omaha Indian Reservation in 1865, Dr. Susan La Flesche Picotteexternal icon was the first Native American woman in the United States to become a physician. Dr. Picotte was a noted public health activist, promoting temperance and hygiene on the Omaha Reservationexternal icon. She cared for both Native Americans and white people during her years of practice, often using her own money to buy treatment supplies when those provided by the Bureau of Indian Affairs ran out. In 1913, just two years before she died, she opened a hospital on the Omaha Reservation.

The Lakota TB and Health Association originated in 1953 during a tuberculosis outbreak among the Cheyenne River Sioux tribe. The founders were four Lakota grandmothers who took management of the outbreak into their own hands. These women―Phoebe Downing (Standing Rockexternal icon), Eunice Larrabee (Cheyenne River), Alfreda Janis Bergin (Pine Ridgeexternal icon), and Irene Groneau (Sisseton-Wahpetonexternal icon)―banded together to serve their tribal health communities by tackling a variety of other health issues, including tuberculosis, mental health, and alcoholism. Their work contributed greatly to the development of the Community Health Representative programs under the Indian Health Service (IHS).

Annie Dodge Waunekaexternal icon, born in 1910, was the first Navajo Nationexternal icon female elected to serve on the Navajo Tribal Council. She was bestowed the highest civilian honor award, the US Presidential Medal of Freedom, for her lifelong work to integrate cultures, allowing for innovations in medicine to be used on the Navajo Reservation to fight devastating communicable diseases. She was responsible for inaugurating multiple campaigns against influenza, trachoma, tuberculosis, contaminated drinking water, alcoholism, and use of the hallucinogen peyote on the reservation. Among her many contributions was the development of an English-to-Navajo medical dictionary to ensure critical communication around disease prevention and treatment. Ms. Wauneka served on the advisory board to the US Surgeon General and the US Public Health Service, received two honorary doctorates in public health, and was recognized by the Navajo Nation as a “legendary mother of the Navajo people.” 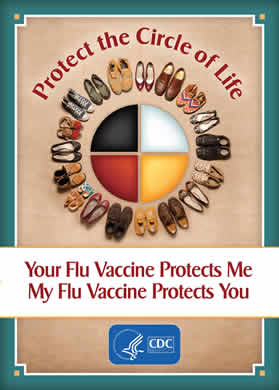 Born in 1903, orphaned as a child, and raised in a boarding school on the Crow Reservation, Susie Walking Bear Yellowtailexternal icon became the first registered nurse among the Crow people and also one of the first in the United States. After working with many tribes as a nurse and then returning to work on the Crow Reservationexternal icon, she began to travel across the country, visiting the reservations as a consultant for the US Public Health Service. She fought against the sterilization of Native American women without informed consent, and she championed the Community Health Representative programs to mitigate language barriers that were affecting the medical care of Native Americans. She was also an appointee on the President’s Council on Indian Education and Nutrition and the US Department of Health, Education, and Welfare’s Council on Indian Health. She received the President’s Award for Outstanding Nursing Health Care, and was named “Grandmother of American Indian Nurses” by her people.

Dr. Everett R. Rhoades, MD, a member of the Kiowa Tribe of Oklahomaexternal icon, was the first Native American director of IHS. During his 11 years in this position, IHS saw its budget allocation from Congress triple, and it built six new hospitals and seven ambulatory care centers across the nation, with additional building underway. There was a substantial increase in ambulatory care services with robust expansion of dental care. Dr. Rhoades also founded the American Association of Indian Physiciansexternal icon, directed the Native American Prevention Research Center, and continues to serve on the Board of the Oklahoma City Indian Clinic and as a lay assistant to the Indian Health Board. A renowned author, Dr. Rhoades has written more than 100 scientific papers.

Jeff Henderson, MD, MPHexternal icon, is a Lakota Indian and enrolled member of the Cheyenne River Sioux tribe of north-central South Dakota. Dr. Henderson founded the Black Hills Center for American Indian Healthexternal icon, whose mission is to enhance the wellness of American Indians through research, service, education, and philanthropy. He serves on the National Advisory Council for CDC’s Breast and Cervical Cancer Early Detection Program. Dr. Henderson is an advocate for the marrying of western and traditional healing practices. He has also extensively studied the impact of traditional food and medicines on Native American health and wellness and has written many articles about the Native voice in healthcare treatment and prevention efforts. 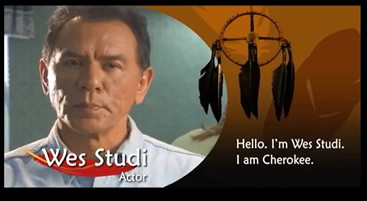 The National Influenza Vaccination Disparities Partnership is a national campaign spearheaded by local influential partners who commit to promoting the importance of flu vaccination among underserved populations. The partnership has more than 200 AI/AN partners. During the 2014–2015 flu season, AI/AN partners organized 16 flu vaccination promotion events and administered approximately 2,000 flu vaccines, using innovative products to promote flu vaccination among the AI/AN network. The Protect the Circle of Life campaign released 12 new radio public service announcements (featuring Wes Studi, a famous actor and member of the Cherokee Nationexternal icon) that were aired on 390 stations. This campaign helped generate 2.5 million impressions and incorporated Navajo, Lakota, and Yupik languages to educate Native audiences about the benefits of flu vaccination. A custom web page was also developed to promote the AI/AN Flu IQ quiz, and an infographic was developed to capture key messages and data that speak to the importance of annual flu vaccination in Indian Country.

In 1993, the CDC Special Pathogens Branch, the state health departments of New Mexico, Colorado, and Utah, IHS, the Navajo Nation, and the University of New Mexico all joined together to confront an outbreak of a newly discovered virus. It was called Sin Nombre virus,external icon and the disease caused by the virus was named hantavirus pulmonary syndrome. The isolation of the virus in a matter of months was remarkable. This success was a result of close cooperation of the agencies and individuals involved in investigating the outbreak, years of basic research on other hantaviruses by CDC and the US Army Medical Research Institute of Infectious Diseases, and the continuing development of modern molecular virologic tests.