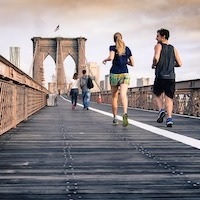 Despite this progress, 28,200 New York State residents die from tobacco-related illnesses each year and more than 1 in 4 New York high school students currently use e-cigarettes.2 Community leaders in New York have taken significant steps to reduce tobacco use, but there is a risk that local tobacco control efforts will be sidelined because of competing public health priorities. The Tobacco Control Program and its local partners use state, local, and national data to keep their communities interested in reducing tobacco-related disease, disparities, and death.

The New York Tobacco Control Program and its local partners understand the importance of using data to motivate community partners and guide decision-making. The program has sophisticated data collection and analysis capabilities.

Top of Page
Reducing the Toll of Tobacco in New York

Higher tobacco retail density is associated with greater tobacco use among adolescents and decreased quit attempts for adult cigarette smokers who want to quit. It also contributes to racial and socioeconomic disparities in tobacco use. Reducing the number of retailers that sell tobacco products in an area may prevent youth initiation and increase quit attempts.3 In addition, a large number of pharmacies sell tobacco products, and often more cheaply than other stores.4 Increasing the price of tobacco products is the single most effective way to reduce tobacco use.5

Relying on local, state, and national data provided by the Tobacco Control Program, community leaders in local areas across New York State have taken steps to reduce the toll of tobacco on young people and underserved populations.

Ed Day, the Rockland County Executive, relied upon national and local data to better understand issues related to the sale of tobacco products in pharmacies. Mr. Day said the following:

“There exists conclusive evidence that tobacco smoke causes cancer, cardiovascular disease, respiratory disease, and negative birth outcomes among other serious and chronic diseases . . . . [E]ach year over 13,000 New Yorkers are diagnosed with lung cancer with about 9,000 people dying of this disease. Smoking is the most common cause of lung cancer and [secondhand smoke] also increases the risk for lung cancer. . . . Access to tobacco products remains a major problem. Our pharmacies should be sites of health and treatment modalities, not places where these addictive tobacco products are readily available and sold.”

CDC’s scientific information, data resources, and funding for state tobacco control and evaluation staff have been a key piece of New York’s tobacco control success. These tools have helped New Yorkers understand the issues and educate their communities, resulting in measures to prevent the harms caused by tobacco use.