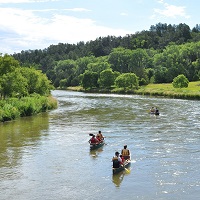 Like the rich plains and prairies throughout the state, many good things come from the hard work of the Tobacco Free Nebraska team from the Nebraska Department of Health and Human Services’ Division of Public Health. The state prohibited smoking in indoor workplaces and public places in 2009, yet 2,500 Nebraskan adults still die from smoking-related illnesses each year.1 Troubled by this and the knowledge that nearly 18,000 Nebraskan children are exposed to secondhand smoke at home,2 the Tobacco Free Nebraska team thought of ways to protect more people from secondhand smoke.

People living in multiunit housing, such as apartments, are particularly susceptible to unwanted secondhand smoke exposure in the home. Secondhand smoke can travel between units in apartment buildings through doorways and in other ways, such as through electrical lines, ventilation systems, and plumbing. Secondhand smoke is not safe at any level.3

Many residents in public housing are children, older adults, and people with disabilities.4 Nebraska’s Public Housing Authorities, which provide government-subsidized housing, were early leaders in the United States for adopting smoke-free housing policies. However, the pace of adopting new smoke-free housing policies in Nebraska’s Public Housing Authorities had slowed. In response, Tobacco Free Nebraska created a program to make implementation easier for the housing authorities. The team also developed a toolkit that included:

The implementation of Tobacco Free Nebraska’s toolkits has already made an impact. In 2017, 10 housing authorities in Nebraska adopted, and 5 housing authorities began planning to adopt, new policies that meet the HUD requirements. That same year, 10 Public Housing Authorities in Nebraska took steps to update their existing smoke-free policies to better protect residents. In addition to protecting people from secondhand smoke, these smoke-free housing policies could help motivate others to quit. This work was done with funding from CDC. In addition, CDC’s scientific data, Tips® Campaign, and other CDC Media Campaign Resource Center tools were key to Tobacco Free Nebraska’s success.