Tobacco Use and Quitting Among Individuals With Behavioral Health Conditions

Adults with mental health or substance use disorders (i.e., behavioral health conditions), smoke cigarettes more than adults without these disorders.1,2,3 Mental disorders are conditions that affect a person’s thinking, feeling, mood or behavior, such as depression, anxiety, bipolar disorder, or schizophrenia. Substance use disorders occur when frequent or repeated use of alcohol, drugs, or both causes significant impairment, such as health problems, disability, and failure to meet major responsibilities at work, school, or home.4

Approximately 1 in 4 adults in the U.S. has some form of behavioral health condition, and these adults consume almost 40% of all cigarettes smoked by adults.3

[Information described below uses data from the National Survey on Drug Use and Health, with different specific definitions on mental illness and substance use disorder]

Tobacco Use Prevalence Among Persons with Mental Health Disorders

Individuals who have mood disorders, psychoses, anxiety disorders, developmental disorders, and substance use disorders are more likely to be addicted to nicotine than those without these disorders. Nicotine dependence has proven to be particularly challenging for individuals suffering from psychiatric disorders, such as schizophrenia.6 Smoking prevalence was highest among those with schizophrenia, at nearly 90%.6 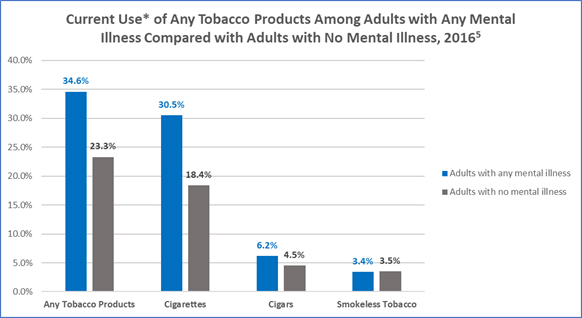 *“Current Use” is defined as self-reported consumption of cigarettes, cigars, and smokeless tobacco in the past month (at the time of survey).

†Data taken from the National Survey on Drug Use and Health, 2016, and refer to adults aged 18 years and older self-reporting any mental illness in the past year, excluding serious mental illness.

Tobacco Use Prevalence Among Persons with Substance Use Disorders

A number of policy strategies can be used in mental health and substance use disorder treatment facilities to encourage smoking cessation: 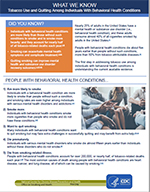 What We Know: Tobacco Use and Quitting Among Individuals With Behavioral Health Conditions [PDF – 937 KB] 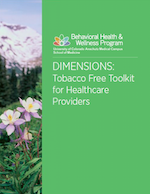 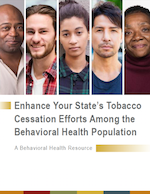 Focusing on People with Mental Illness 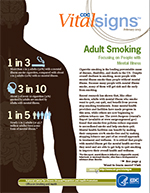