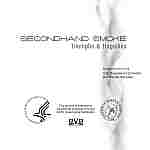 This is about improving and saving people’s lives.

Unfortunately because of the secondhand smoke in the air, I had an asthma attack within 10 minutes so I was forced to leave.

The cancer and how I got it is due to my exposure to secondhand smoke in all those smoky clubs for all those years.

You’re asking the employee to choose between their health and making a living. That’s just not fair.

I’m grateful to be here today to be able to say unequivocally that the debate is over. The science is clear: secondhand smoke is not a mere annoyance but a serious health hazard that causes premature death and disease in children and nonsmoking adults. In the course of the past 20 years, the scientific community has reached consensus on this point.

I’ve been a waitress for 40 years to earn a decent living for my daughter and myself. My doctor told me I had a smoker’s tumor and therefore I’m dying. I never smoked a day in my life. I never smoked. The air was blue where I worked and I’m dying of lung cancer from secondhand smoke.

For myself, I feel that I spent 40 years working in the industry and now I’m coming out to die, and so I want people to know that to me there was too much exposure to the known health hazard in the workplace.

Those kinds of atmospheres—bars, restaurants, casinos—are the last vestiges of smoking. I was a very successful, award-winning stand-up comedienne who in August 2001 had surgery for lung cancer that was due to my exposure to secondhand smoke in all those smoky clubs for all those 11 years.

She’s decided that she needs to tell other people what happened to her and she needs to use her story to motivate people to change.

If you want to catch up with Rene, she’s going to be at that meeting tonight.

And everybody should come out. It’s civic.

The city of El Paso is about the 21st largest city in the country. We are as far west Texas as you can get and we border with what is Mexico.

In the very beginning, which was in November of 2000, I told a reporter that there was no way that we were ever going to pass such a tough ordinance, a smoking ordinance.

My gut instinct was that it would have negative impacts on businesses and that people had the right to determine their own future. As I started really researching and going out and starting asking questions, my opinion started to gradually shift.

I don’t think it’s had a negative impact. We still see the people who used to smoke in our restaurants, and the people who didn’t smoke seem to come more often than they used to. So we’ve had really robust sales in the past 5 years.

Lexington is a community of 300,000 people nestled in central Kentucky. Lexington has always been an agricultural center. The tobacco background is central to our DNA. Smart business people like Mike Scanlon know that we can be proud of our community’s past but we don’t want to live in it. That’s the case with the smoke-free initiative we’ve had in this town.

Really, what I’m trying to do is show everybody what the future looks like.

As a businessman, I had been through many communities in Phoenix going smoke-free, and I knew it didn’t hurt business.

I think part of it gets down to the decision of how are we going to make our money, and how do we explain to ourselves when we drive home with our profits that we’re letting our employees get sick and that we’re looking at the employees and saying, “Well, if you don’t want to work here then don’t.”

We came to the conclusion that it would be advantageous for us to have that competitive advantage where we’re smoke-free where other restaurants aren’t, knowing that that’s really the way it’s going.

The biggest single beneficiary from our decision to go smoke-free as a company was our employees. It was our belief that if you value your employees as much as we do that you have to take care of them.

In the middle of the tobacco bill, we had common sense enough to make smoke-free environments. I know there’ll be a lot more healthy, happy families as a result of this, and I think at the end of the day that’s what people sit in the office to do.

There is no risk-free level of secondhand smoke exposure, with even brief exposure adversely affecting the cardiovascular and respiratory systems.

Children are most exposed to secondhand smoke in their homes and in their cars. What we’re asking parents to do is to just become aware of the fact that the home is the area where there’s the greatest exposure and it’s going to have to be the place where personal commitment is made.

What impressed me about this young man, because he was in fifth grade at the time, was how knowledgeable he was. That really encouraged me.

My parents were taking me bowling. Unfortunately because of the secondhand smoke in the air, I had an asthma attack within 10 minutes so I was forced to leave.

We’re getting more and more reports that indicate that children are just suffering disproportionately, that asthmatic children are being triggered by people smoking and their being around smokers.

I was really disappointed by this. I came home and I was like, “How am I ever going to have fun if my asthma is going to inhibit me from participating in such activities?” So my parents, you know, they suggested, “Why don’t you try and do something about it.”

Amit was there because he felt that children and families need to have places that they could go that were smoke-free.

We wanted to be able to provide places in the community where families could go and not have to be affected by the harmful effects of secondhand smoke.

I made a presentation representing the children of Lubbock—”We also need laws to make our air safer to breathe”—and we ended up winning 64 percent of the vote. Finally we were going to get a smoking ban in Lubbock.

The 1986 Surgeon General’s report concluded that simple separation of smokers and nonsmokers within the same air space may reduce, but not eliminate, secondhand smoke exposure among nonsmokers.

The current report expands on that finding by concluding that even sophisticated ventilation approaches cannot completely remove secondhand smoke from an indoor space.

Because there is no risk-free level of secondhand smoke exposure, anything less cannot ensure that nonsmokers are fully protected from the dangers of exposure to secondhand smoke.

If I can stop others from having to go through and experience what I had to—they may not have the skills to come through it with laughter—so if I can help do that, then yes, this is a happy ending to a sad story.

And when you can stand up for the good of society, you can die the next day and feel like you have mattered on this earth.

I can’t say that I’ll be the last one to die, but I’m hoping that at least I’ll make a difference.