This year alone, lung cancer will kill nearly 68,000 U.S. women. That’s one in every four cancer deaths among women, and about 27,000 more deaths than from breast cancer (41,000). In 1999, approximately 165,000 women died prematurely from smoking-related diseases, like cancer and heart disease. Women also face unique health effects from smoking such as problems related to pregnancy.

In the 1990s, the decline in smoking rates among adult women stalled and, at the same time, rates were rising steeply among teenaged girls, blunting earlier progress. Smoking rates among women with less than a high school education are three times higher than for college graduates. Nearly all women who smoke started as teenagers—and 30% of high school senior girls are still current smokers.

We have the solutions for preventing and reducing smoking among women. Quitting smoking has great health benefits for women of all ages. Thanks to an aggressive, sustained anti-smoking program, California has seen a decline in women’s lung cancer rates while they are still rising in the rest of the country. The voice of women is needed to counter tobacco marketing campaigns that equate success for women with smoking.

“When calling attention to public health problems, we must not misuse the word ‘epidemic.’ But there is no better word to describe the 600-percent increase since 1950 in women’s death rates for lung cancer, a disease primarily caused by cigarette smoking. Clearly, smoking-related disease among women is a full-blown epidemic.”

Women and Smoking: a Report of the Surgeon General makes its overarching theme clear-smoking is a woman’s issue. This report summarizes what is now known about smoking among women, including patterns and trends in smoking habits, factors associated with starting to smoke and continuing to smoke, the consequences of smoking on women’s health and interventions for cessation and prevention. What the report also makes apparent is how the tobacco industry has historically and contemporarily created marketing specifically targeted at women. Smoking is the leading known cause of preventable death and disease among women. In 2000, far more women died of lung cancer than of breast cancer. A number of things need to be acted on to curb the epidemic of smoking and smoking-related diseases among women in the United States and throughout the world. 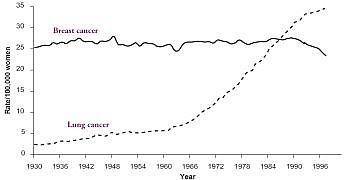 Patterns of Tobacco Use Among Women and Girls

Health Consequences of Tobacco Use Among Women

Factors Influencing Tobacco Use Among Women

Efforts to Reduce Tobacco Use Among Women

Disclaimer: Data and findings provided in the publications on this page reflect the content of this particular Surgeon General’s Report. More recent information may exist elsewhere on the Smoking & Tobacco Use Web site (for example, in fact sheets, frequently asked questions, or other materials that are reviewed on a regular basis and updated accordingly).