Secondhand smoke harms children and adults, and the only way to fully protect nonsmokers is to eliminate smoking in all homes, worksites, and public places.1,2,3

You can take steps to protect yourself and your family from secondhand smoke, such as making your home and vehicles smokefree.2,3

Most exposure to secondhand smoke occurs in homes and workplaces.2,3

People are also exposed to secondhand smoke in public places—such as in restaurants, bars, and casinos—as well as in cars and other vehicles.2,3

People with lower income and lower education are less likely to be covered by smokefree laws in worksites, restaurants, and bars.4

What Is Secondhand Smoke?

Secondhand smoke can infiltrate into other units through hallways and stairwells.

In adults who have never smoked, secondhand smoke can cause:

Smokefree laws can reduce the risk for heart disease and lung cancer among nonsmokers.1

Exposure to secondhand smoke can be measured by testing saliva, urine, or blood to see if it contains cotinine.3 Cotinine is created when the body breaks down the nicotine found in tobacco smoke. 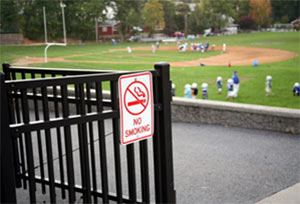 What You Can Do

You can protect yourself and your family from secondhand smoke by:2,3,4