Related Pages
On this Page

TB bacteria are spread through the air from one person to another. The TB bacteria are put into the air when a person with TB disease of the lungs or throat coughs, speaks, or sings. People nearby may breathe in these bacteria and become infected.

Although anyone can get TB, some people are at greater risk of TB than others. This is because some population groups have higher rates of TB disease in their communities, thus raising the risk of becoming infected with the bacteria. Additionally, a range of social, economic, and demographic factors affect a person’s risk of TB disease. This section provides information on the prevention challenges for various groups and what CDC is doing to address them.

TB adversely affects groups that have historically experienced greater obstacles to health. The percentage of TB cases that occur in Hispanic or Latino, Black or African American, and Asian persons is higher than expected based on the percentage of these populations in the U.S. population. In 2020, about 89% of the TB cases reported in the United States occurred among racial and ethnic minority groups. The percentage of cases occurring in non-U.S.–born persons was 71.5% of the national case total in 2020.

TB rates vary by geographic location across the United States. Seven states and the District of Columbia had incidence rates higher than the national rate of 2.2 cases per 100,000 persons in 2020: 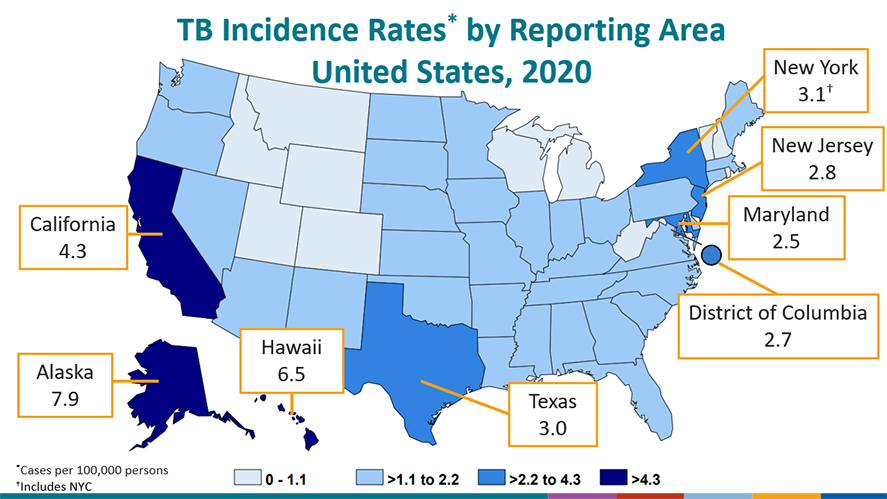 CDC monitors these geographic differences and provides funds to support TB control efforts in all states, as well as certain metropolitan areas with high rates of TB.

Because of the substantially greater risk of exposure to TB bacteria outside of the United States, origin of birth is the most prominent risk factor for TB disease in the United States. Consistent with previous years, the majority of reported persons diagnosed with TB disease occurred among non-U.S.–born persons (71.5%) in 2020.

CDC surveillance efforts and research demonstrate TB disparities in relation to other factors such as housing insecurity and incarceration.

What CDC is Doing to Address Disparities in TB

CDC is committed to improving the health of people disproportionately affected by TB. To achieve TB elimination, ongoing efforts are needed to address the persistent disparities that exist. CDC is continuing to work on a series of projects designed to identify the underlying causes, as well as educate and raise awareness about health disparities in TB. This includes