“While I was going to college, I noticed that I, you know, had started losing a lot of weight and then I started getting night sweats. They weren’t bad at first but, you know, they became more and more. I’d wake up, you know, completely soaked,” Khayr recalls.

“I think the biggest misconception I had about TB when I was diagnosed with it, when I had the latent infection and then even when I was diagnosed the second time with the active TB, was that it wasn’t a serious disease. You know, I felt like TB had been cured or maybe if not cured I knew that if you took medication that, you know, it would go away. I did not realize the severity of TB or even the different types of TB,” says Khayr.

But even after starting treatment for TB disease he didn’t feel any better. He knew something was not right.  After some additional tests and another chest x-ray, his doctor had some disappointing news.

“He said ‘listen, you have something called drug-resistant TB. It’s when the first-line drugs that everybody takes are not enough to cure the disease. So, we’re going to add some second-line drugs,’ and he kind of went through the gambit of what they were, some of the effects that we might have,” says Khayr.

People with multidrug-resistant TB disease must be treated with special medicines. These medicines are not as good as the usual medicines for TB, and treatment takes much longer. Instead of the 6-9 months of treatment for drug-susceptible TB, Khayr’s treatment would take 18 to 24 months.  He also needed to isolate again until he was no longer infectious.

Reflecting on the challenges of such a long time on medications and in isolation, Khayr hopes his story can encourage people with latent TB infection to complete treatment, to prevent the development of TB disease.

“If there’s one thing I could change about my treatment personally it would be to go back in time to when I was 19 and I was diagnosed with latent TB…it would have saved me a lot of grief in the future. It would have saved me, you know, 7 months in isolation. So, I think stopping TB at that initial stage, when it’s latent and when you’re not infectious, I think is something that we need to educate more people about” says Khayr. 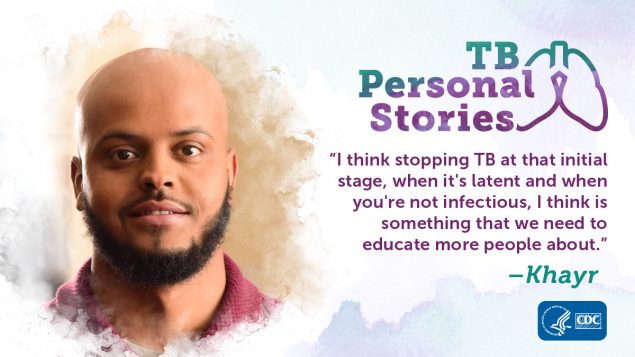 Reflecting on the challenges of nearly 2 years on TB medications, and 7 months of isolation, Khayr, a TB survivor, hopes his story can encourage people with latent TB infection to complete treatment and prevent the development of TB disease. Watch his story to learn about his experience: https://go.usa.gov/xHb7Wexternal icon

Khayr, a #TB survivor, hopes his story can encourage people with latent TB infection to complete treatment and prevent the development of TB disease. Watch his story to learn about his experience: https://go.usa.gov/xHb7Wexternal icon