This report compiles TB surveillance data collected for U.S. TB cases counted in 2019, before the COVID-19 pandemic directly affected the United States. The COVID-19 pandemic has strained public health services, including TB control services, across sectors of public health. A publication in CDC’s Morbidity and Mortality Weekly Report suggests that the COVID-19 response is diverting resources from essential TB elimination activities. Effects of reduced public health capacity for TB prevention (e.g., changes in TB incidence or lower completion of treatment rates) will become clearer after provisional surveillance data, including number of U.S. TB cases reported during 2020, are published in early 2021. We will continue to work closely with state and local TB control programs, as well as our partners at the National TB Controllers Association to monitor and document the effect of COVID-19 on 2020 TB reporting activities. 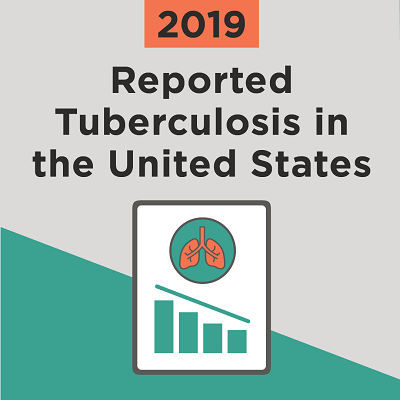 CDC has created a slideset and graphics  with highlights from the surveillance report to support TB education and outreach to clinicians, health care agencies, and community organizations.

This 2019 edition of Reported Tuberculosis in the United States is published exclusively online, as part of CDC’s Digital First Initiative to help audiences discover, view, and share content more easily.

The United States continues to have one of the lowest TB case rates in the world, and the 2019 case count represents the lowest number of TB cases on record.  Still, too many people suffer from TB disease and our progress is too slow to eliminate TB in this century. Ending TB will require a dual approach of maintaining and strengthening current TB control priorities, while increasing efforts to identify and treat latent TB infection in populations at risk for TB disease.

As TB colleagues across the United States and around the world continue to make valuable contributions in the response to COVID-19, we gratefully acknowledge the contributions of all state and local health departments throughout the United States whose staff collected and reported the data used in this publication. Thank you for your work and commitment to eliminate TB.