Tuberculosis (TB) is a disease that is spread from person to person through the air. TB bacteria usually attack the lungs, but it can attack any part of the body such as the kidney, spine, and brain. TB symptoms can include a persistent cough, fever, night sweats, and unintentional weight loss. If not treated properly, TB disease can be fatal.

TB disease was once a leading cause of death in the United States, but since 1993 the rates of TB in the country have declined in almost all racial and ethnic groups. In 2015, a total of 9,557 TB cases were reported in the United States; however, Hispanics/Latinos continue to have a disproportionately higher burden of TB.

Several important factors contribute to the disproportionate burden of TB in racial/ethnic groups, including Hispanics/ Latinos. These factors include being born in countries with high rates of TB or traveling to their country of origin, living in overcrowded and poorly ventilated residences, and greater burden of co-morbidities associated with TB.

In 2015, TB disease was reported in 2,694 Hispanics/Latinos in the United States, accounting for 28% of all people reported with TB nationally. 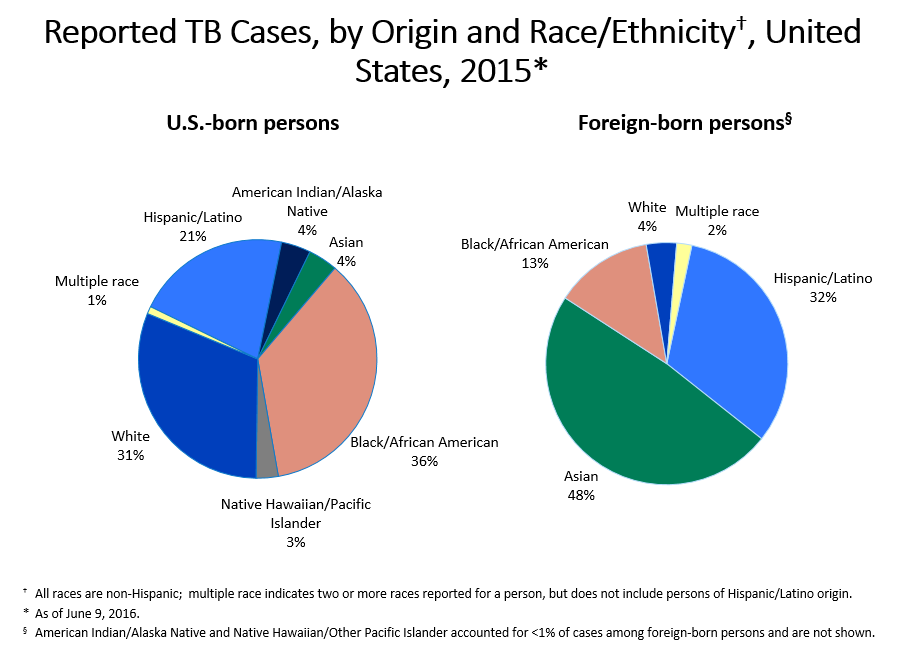 TB is a challenging disease to diagnose, treat, and control. Dwindling resources and loss of public health capacity, including access to care and maintaining clinical and public health expertise add to the challenge. It is critical to reach those at highest risk for TB, and to identify and implement innovative strategies to improve diagnosis and treatment.

What CDC is Doing

To achieve TB elimination, ongoing efforts are needed to address the persistent disparities that exist between U.S.- born and foreign-born people, and between whites and racial and ethnic groups in the United States.

CDC is collaborating with other national and international public health organizations to improve screening of immigrants and refugees, test recent arrivals from countries with high rates of TB, and improve TB control and prevention activities along the border between the United States and Mexico. Foreign-born TB case rates are declining in number, but not as quickly as among the U.S.-born.